Ten thousand years ago, we took a day trip to Ayutthaya. I snapped a bunch of photos for you, then left them on my phone until it was factory reset after a poorly designed update. Fortunately for all of us, the photos were automatically uploaded to my Google account. Thus, behold: 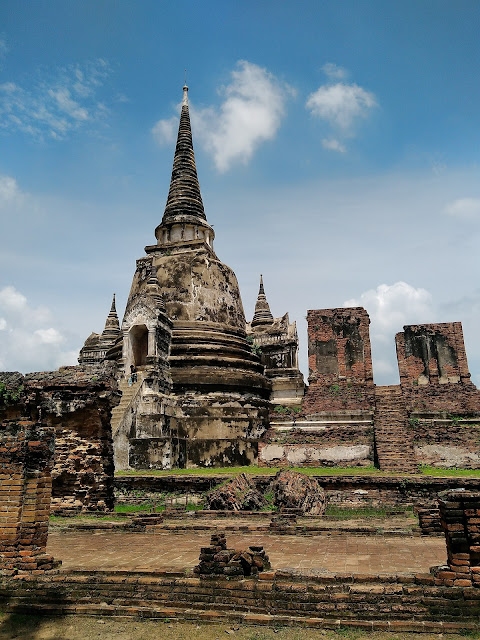 Ayutthaya is another old city. Unlike the previous old cities we've visited, this one is in Asia. It was a pretty important city in Asia, as the second capital city of Siam, and was a major international trading hub. Ayutthaya hit its peak around 1300-1700 AD, before it was sacked by the Burmese. The majority of the city was destroyed, but the ruins are impressive. 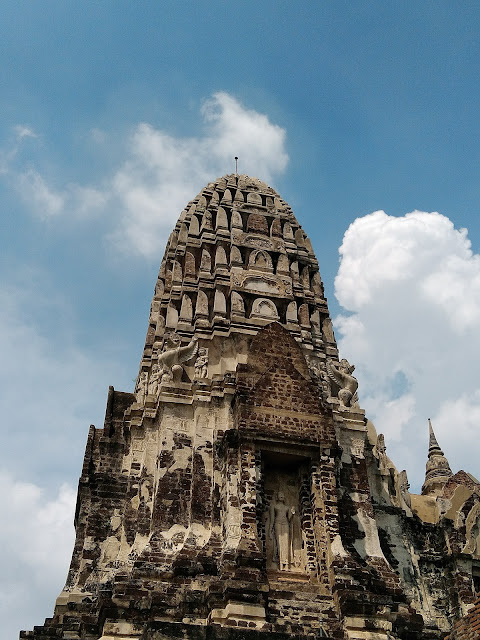 Ayutthaya was constructed along a grid pattern. Streets and canals were carefully planned to take advantage of the naturally occurring water resources. The city sits at the crossroads of three big rivers, and had an advanced irrigation system. Ayutthaya had extensive international ties, and a blended international and local population. It's similar to Bangkok, which became the capital after Ayutthaya fell. It was in a strategic location, with a solid economy, and knew how to cater to expats. One dissimilarity is that Bangkok is super sprawly. 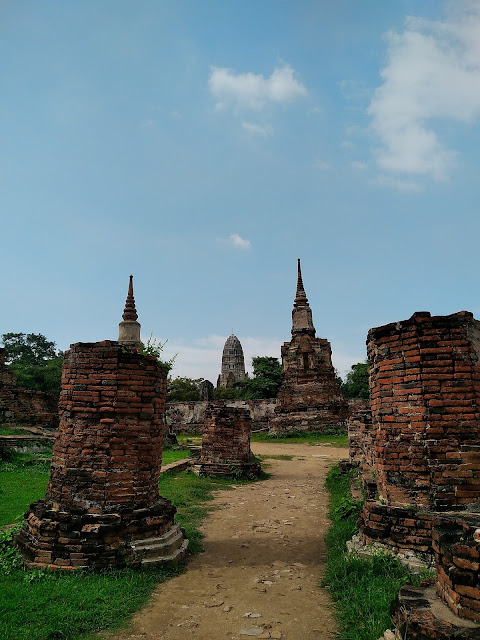 Most of the visible ruins in Ayutthaya were parts of monasteries. Not a lot of other structures survived. The ruins are spread over a wide territory, and we've heard that it's best to see them from a bicycle. We drove, and walked. We did not see everything. They do offer elephant rides around some of the ruins, but we were able to resist that urge. There's broad consensus that those touristy Thailand elephant rides are not good for the elephants. Google it. 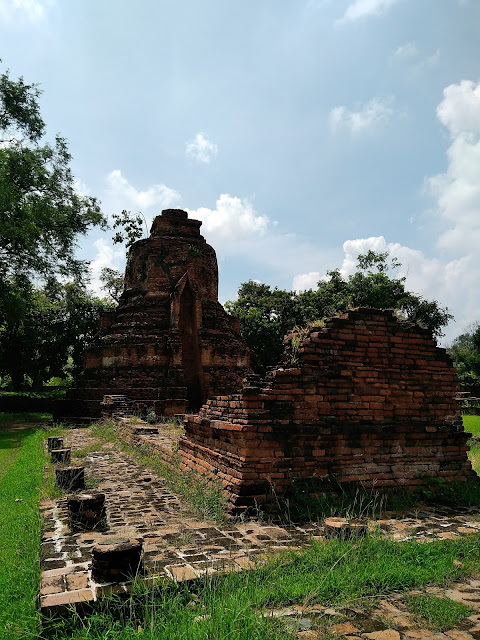 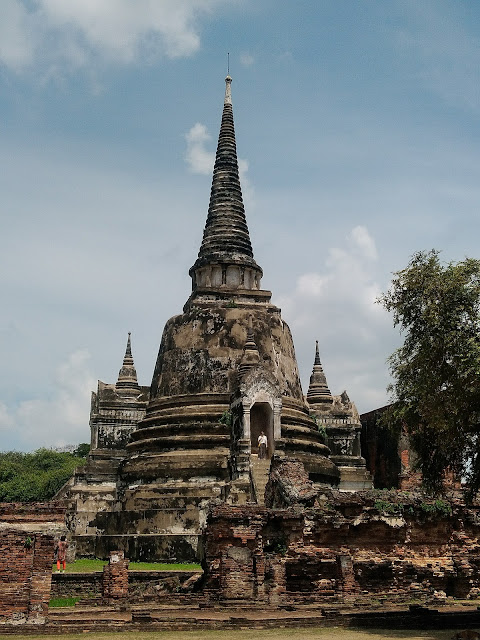 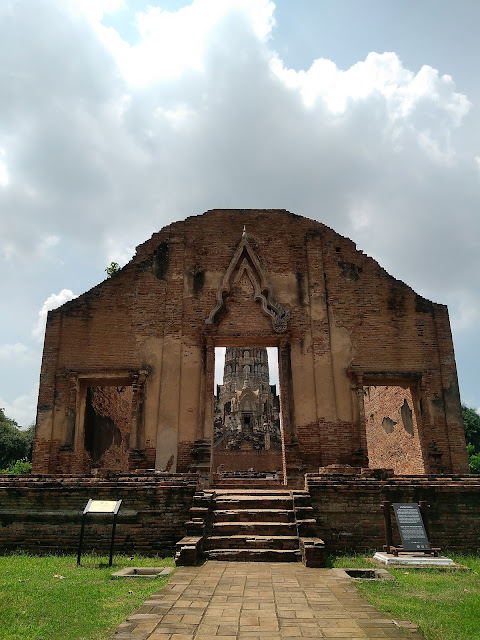 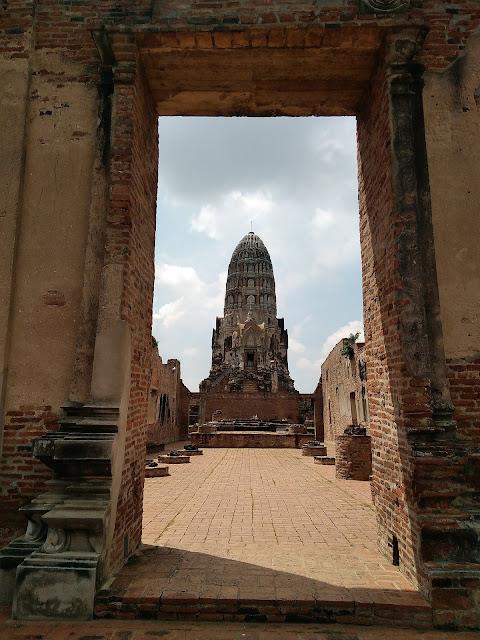 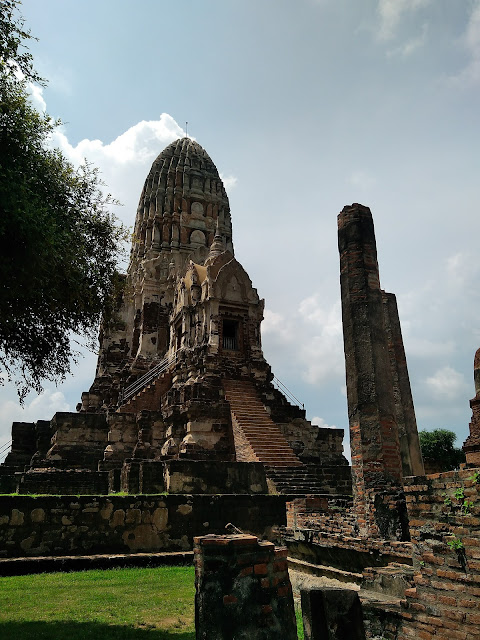 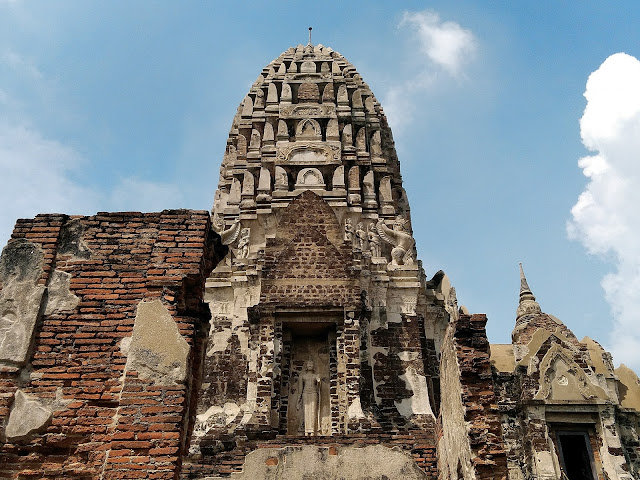 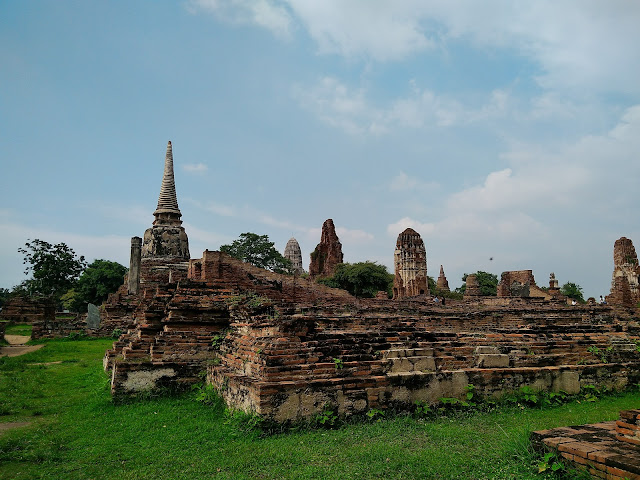 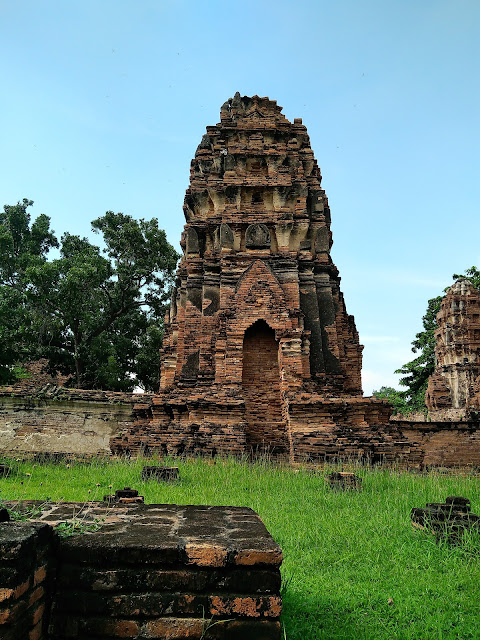 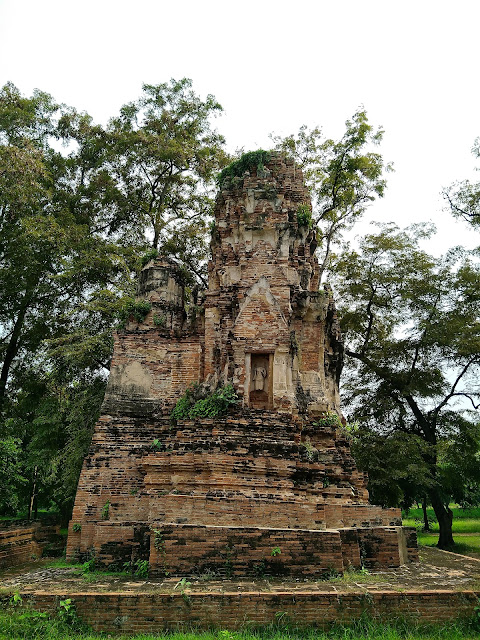 Normally, the very thorough historian in me likes to caption every photo, but I cannot remember what it all is. This was October. It might as well have been fifteen years ago. I remember going into one structure (the fourth photo above the top of this paragraph) that had a very narrow stairway leading down into the rock. At the base of the staircase, you could duck under an overhang and look up at several really rad, old murals. Phil said it felt like Indiana Jones. I said it felt like claustrophobia.

One other thing I can remember is that a lot of the Buddha figures were missing their heads. This isn't some sort of weird natural phenomenon, they were systematically looted. There are a few that are still fully intact. I did a little bit of Googreasearch to determine whether it's disrespectful to photograph depictions of Buddha. Most sources say it's okay, provided you're not doing something else that's disrespectful, e.g. standing on Buddha, mocking Buddha, pulling down your pants and taking a photo of your naked butt for your Instagram (this honest-to-goodness just happened at Wat Arun in Bangkok). Depictions of Buddha are not worshipped as idols, but Buddhists will often show religious devotion in front of a depiction to show reverence for Buddha's teachings. 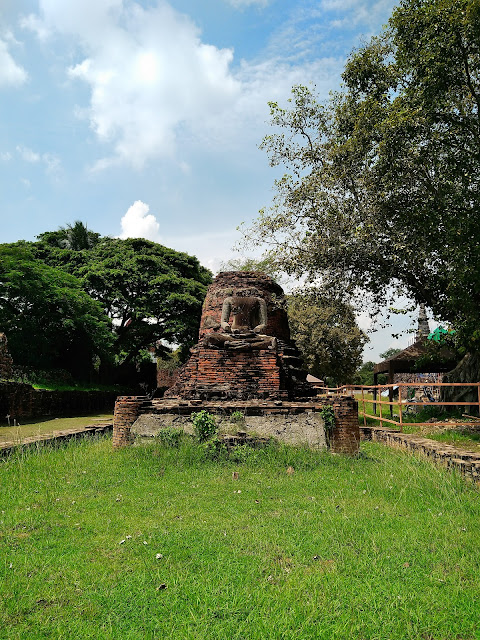 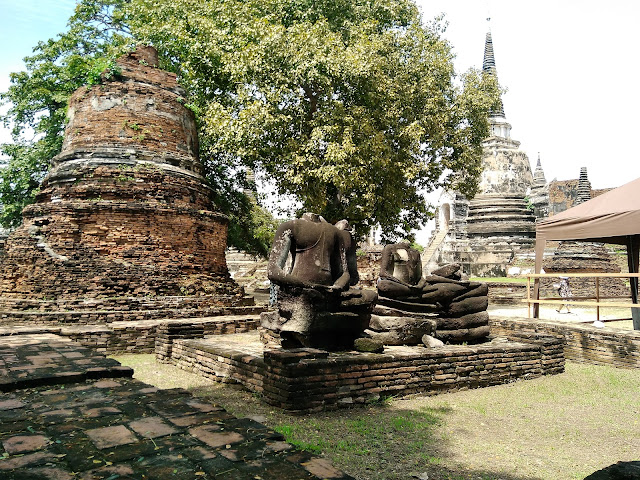 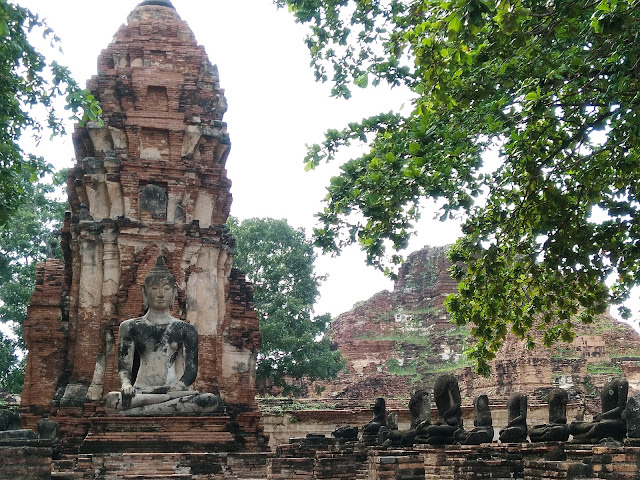 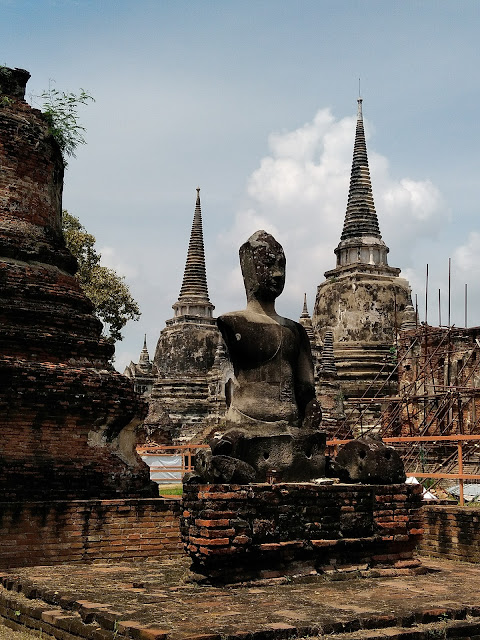 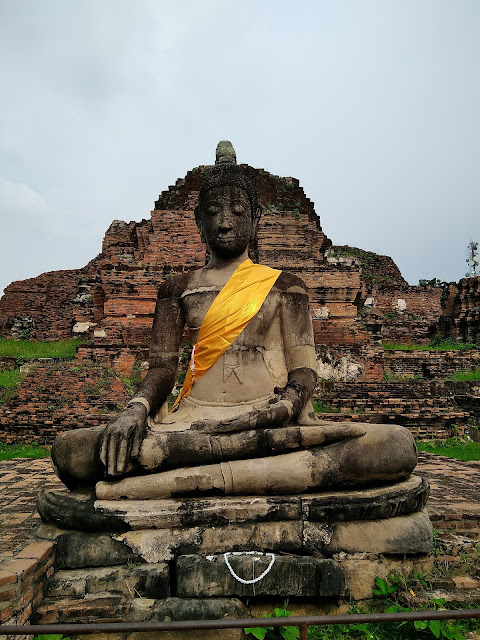 Ayutthaya is not too far from Bangkok. We went with Phil's family. We couldn't all fit in our car, so we rented a sixteen passenger van. There were only six of us, so that left ten seats of open space. It was awesome. I want to road trip like that from now on. Visiting Ayutthaya was the first time we got out of Bangkok since we arrived. Living in Bangkok is like living in a convenient, multicultural island, and I am starting to get some serious island fever, man. I cannot wait to see more of this country. 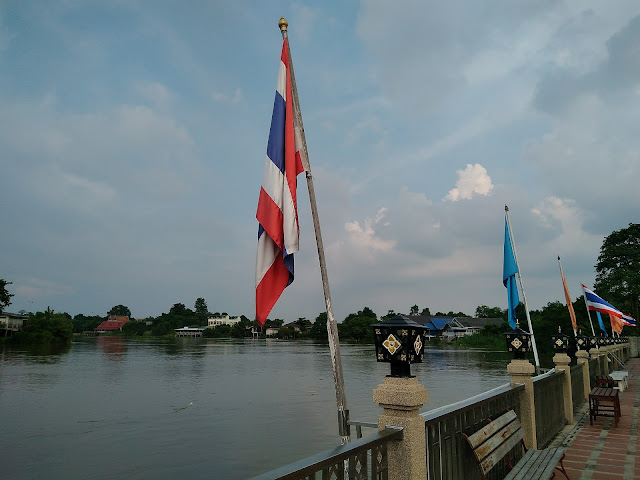