This leftover Greece post is an especially painful one, because I really loved our trip to Hydra.

Let's start by talking about how to pronounce the name of this island. I know your gut instinct is to call it "high-druh," and I can understand why. You're wrong. I don't care if you have a friend who went to Greece, and came back, and told you all about their trip to "High-druh," and now you've been calling it that ever since. They're wrong, and so are you. Hydra is pronounced "EE-thruh." If you can't manage a Greek accent (I can't), just call it, "EE-druh." You will sound ten thousand times smarter if you do this.

While we're here, let's talk about gyros. A gyro is pronounced "year-o," not "jigh-ro." If you ever, ever call a gyro a "jigh-ro" in front of me, I will smack it out of your hand.

Now that I've gotten that off my chest, we can look at some pictures.

Hydra is best known as the island without cars. The only vehicles allowed on the streets are garbage trucks. It's as peaceful as it sounds. The main thing the island has going for it is tourism. Lots of Athenians come here, along with the rest of the world. The amenities--hotels, restaurants, museums, are all clustered around or near Hydra port. There are a few monasteries in the hills. There were multiple fancy yachts at port. Wealthies like to visit.


Like Salamina, Hydra is not that happening, tourist-sight-wise. It is quiet, beautiful, and not far from the mainland. As one of the few, well-stocked places without cars, it's worth a visit for that experience alone. There are two places to catch a ferry to Hydra. The first is Piraeus port, and the other is a port in the Peloponnese. The ferry from Piraeus takes about an hour, and the one from Peloponnese takes twenty minutes. Now that I've told you this, I'm really hopeful that you won't actually go. It was so nice when we went. I'd hate to ruin it with a whole bunch of people.


We popped over to Hydra on a day trip. It was delightful. We were there on an off-day, so it was quieter than usual. The views were just...stunning. 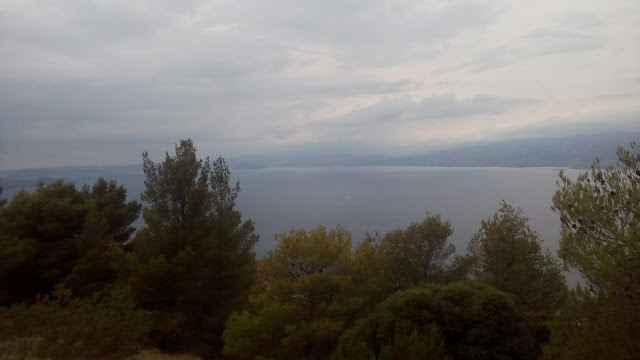 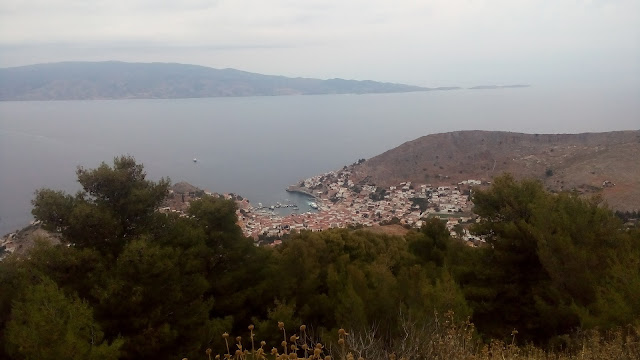 Intrepid readers will notice that it was not a sunny day on the island. We were heavily threatened by clouds the whole time we were in the hills. When we made it back to the port, it unloaded on us. We were happy to have our umbrellas, and found a cafe along the port that kept us out of the rain. Things improved while we were eating, and we had just paid our bill when the second round hit.

The thunder began loudly, and managed to get louder over the course of a few minutes. The rain came down in buckets, then barrels. Pedestrians who'd crowded under the cafe awning moved toward the building, until everyone who could was standing inside, and everyone who couldn't was flattened against the walls. The awning sunk under the rain. The one at the cafe next door collapsed, and narrowly missed a waiter. The waiters at our cafe were running back and forth, shirtless, with giant, prodding poles, pushing the water off as fast as they could. The sidewalk was a creek.

It was far and away the coolest storm we saw in Greece.

The rain eventually moved on, and we were able to venture out again for a few minutes before our ferry arrived. My shoes were soaked, but I took that beautiful photo of the port, so it wasn't a total loss.


I would gladly go back to Hydra, with or without a thunderstorm. It's just nice.
Posted by jj at 11:23 AM