My main fruit guy at laiki is such a nice person. He was the first vendor I met when I started going to the market. He's the guy who came out from behind his stall and patted me on the back when I butchered the Greek language, and confused myself with euro coins. He only speaks a handful of English words, but he's learned a few more in the two years we've known each other. He's started telling me tidbits about his life. In October, he went to the sea. Just before Christmas, he visited Sweden. A few weeks ago, he was in London, visiting his daughter. It's always nice to see him, and not just because he gives The Kid a free banana every week.

I wish I could speak Greek, because I would love to be able to talk to my fruit guy in his language. I'd love to know his name, and where he grew up. I'm curious about his kids, and what they do outside of Greece. I want to be able to tell him why we're in Greece, and be able to say goodbye for good when we leave in a few months. There's a pragmatic side to my wish, too. I would love to know what he actually told me about the pineapple I bought yesterday.

When I pointed to the pineapple, he got a hard look of concentration on his face, and began gesturing while he said something in Greek. I must have pulled my "I'm-confused-but-I-look-pissed-because-that's-just-what-my-face-does" face, because he tried again in English. "Tomorrow," he said. "Tomorrow," pointing at the pineapple and gesturing again. Given the context, and the gestures, I interpreted his meaning as, "This pineapple is not ripe yet. Don't cut it open today, wait a day or two." After I paid, he repeated, "Tomorrow," one more time with gestures, and I was like, "Yeah, yeah. I understand. I get it."

I did not get it. 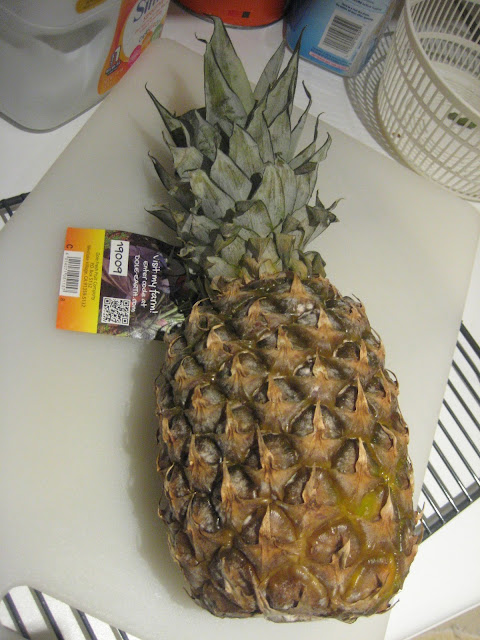 Friends, that pineapple was ripe as sin. Relying on my incorrectly translated instructions, I left the pineapple in its paper bag overnight. Tonight, as I was wandering aimlessly around the kitchen, I smelled something foul. I narrowed it down to the pineapple bag, and found a disgusting, squishy, moldy piece of fruit inside. That photograph above looks like a normal pineapple in lighting that makes it look dark. It's not the lighting, it looked like that for real. Here's a view of the bottom: 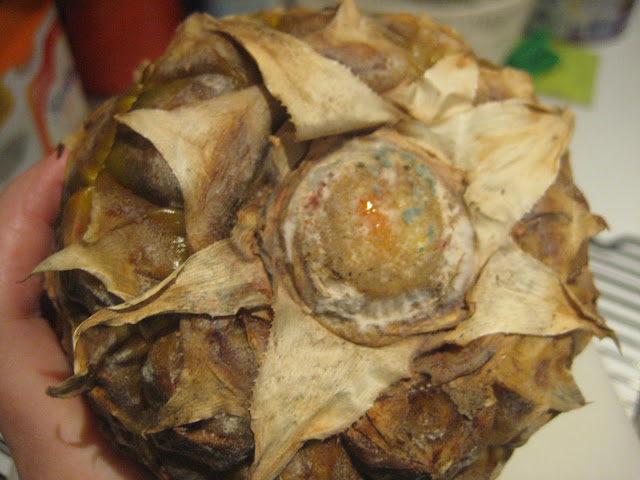 It all came together for me. My fruit guy was probably trying to tell me that the pineapple was ripe, and needed to be chopped before "tomorrow." Mold grows really quickly here. The produce isn't treated with the same process as it is back home. If I were to leave a thing of unwashed strawberries on the counter all day, which I have, a good third would mold over and have to be thrown away, which they have. I basically did exactly the opposite of what I should have done with that pineapple. 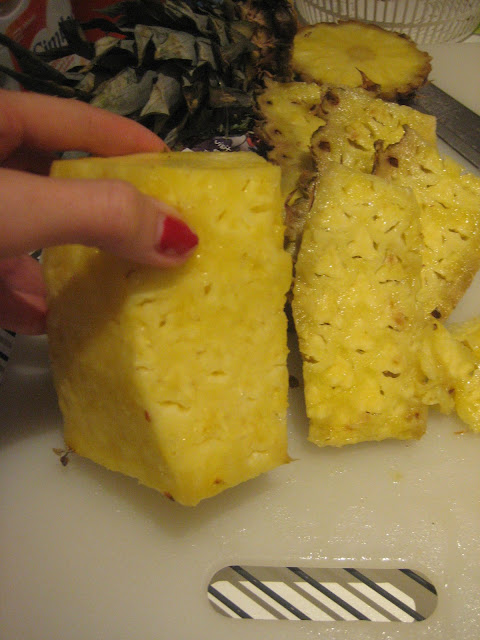 I was curious what the pineapple looked like on the inside. Honestly, it didn't look bad. I briefly considered eating it anyway, but then I smelled it again. That thing was nasty. I threw it away.


Language barriers can cause little inconveniences, or serious misunderstandings. We'd all be in a better position if we took the time to understand what others are trying to tell us. At the very least, we'd save a few pineapples.
Posted by jj at 10:20 PM