Santorini, or Thera, or Thira

This post is dedicated to my former boss. Don't worry, she's not dead. She's just been waiting for two years to see Santorini photos.

It has taken us a long time to visit Santorini. If we're being totally honest, part of the reason we didn't go earlier is that so many people think Santorini is "the thing" to see in Greece. Phil and I are both reactive when someone tells us what to do. We finally flew down there a few weeks ago for a quick day trip. We left in the morning, landed by 10am, and were home in Athens by 9pm. It was great. The flights were cheap (off season), and short (35 minutes each way). We rented a car on the island, and saw everything we wanted to see. It really is lovely. I took a bunch of photos for you, but I want to give you a boring history of the island first, so you know what you're seeing. There's a lot of history. Let's get started.

The first thing you should know about Santorini is that in Greek, it's called Thira. If you call it Santorini, everyone will know what you're talking about, and even the Greeks I talked to about Santorini called it Santorini. If, however, you want to sound cool and worldly, call it Thira. Santorini/Thira was part of the Minoan empire before it was blown sky-high in one of the largest volcanic eruptions of all time. The eruption punched a hole in the island, leaving behind a water-filled caldera. The eruption also caused a massive tsunami that drowned Crete, and is thought to have caused the collapse of the Minoan civilization on that island.

There are some pretty cool theories, and legends surrounding Santorini. Some people believe it's the basis for the story of Atlantis. Other people think it might have been the source of the biblical Exodus. Regardless of what's true, the island has been shaped (literally) by the eruption. The volcano is currently dormant, but it's not extinct. Seismic activity is common, and the island was devastated by an earthquake in 1956. It's been rebuilt to support its primary industry--tourism.

The best way to think of Santorini is like Greece's version of Jackson Hole. It's a really nice, lovely place, but if you hit it in high tourist season, you might not love it. We were glad to be there in the winter, because the roads were easy to traverse, the airport was sleepy, and we didn't run into many other tourists. The downside of going in the off-season is that most of the restaurants and stores are closed, and the beaches are cold.

The city was buried like Pompeii, (but a thousand years earlier!!!), and is remarkably well-preserved. 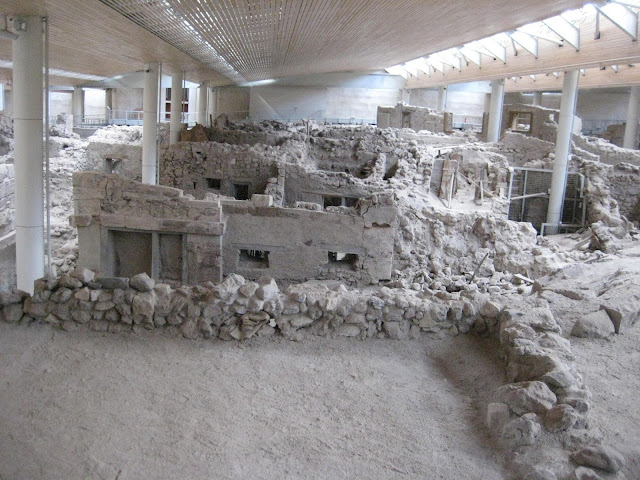 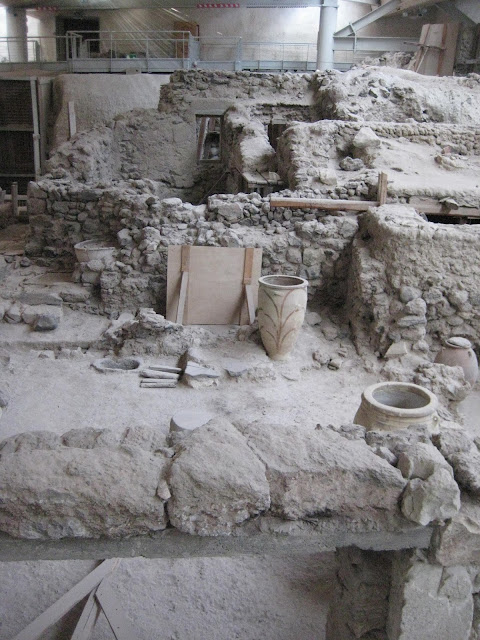 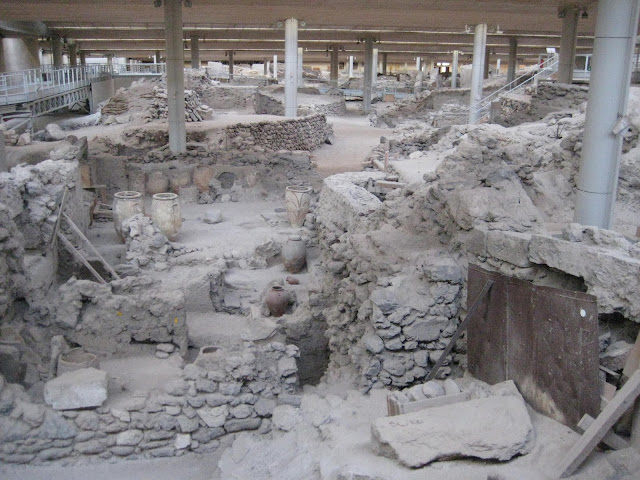 Phil, The Kid, and I had the whole place to ourselves. The building was locked when we arrived. A woman working at the site let us in, and patiently sat at the front desk while we walked around. It was really something. The site itself is cool, but not as cool as the internet would have you believe. Many of the items they've found here have been removed to museums, including the National Archaeological Museum in Athens. We weren't able to get close to any of the buildings, though there were pathways leading to, and through, some of them. Probably they rope stuff off in the winter. We spent about forty-five minutes in the site, and that was enough to see it thoroughly.


Akroti is next door to the red beach. There is also a white beach, and a black beach. This is the only one we saw, because, again, no one wants to sit on a cold beach.


We drove to the tip of the island, and looked back at the villages. It was an impressive sight. There's an old lighthouse out there, and a great view of the other, nearby islands.


From the lighthouse, we drove all the way up the mountain to the highest point on the island. There's a really nice monastery up there. I considered becoming a monk for the view.

We drove down the mountain into Fira. This is the main city on the island. Like everywhere else, the views are spectacular. Some are more famous than others. 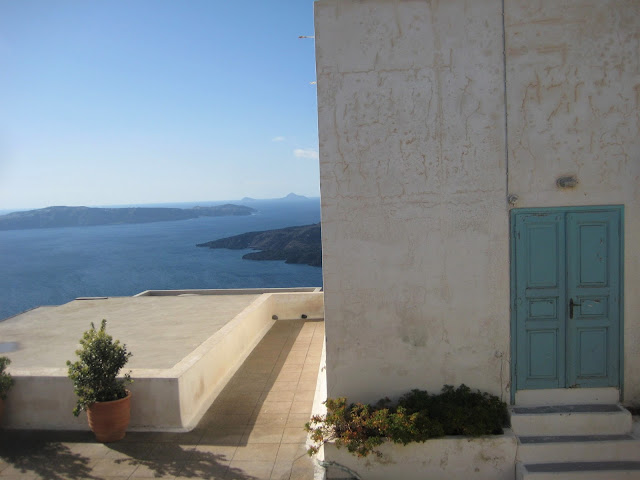 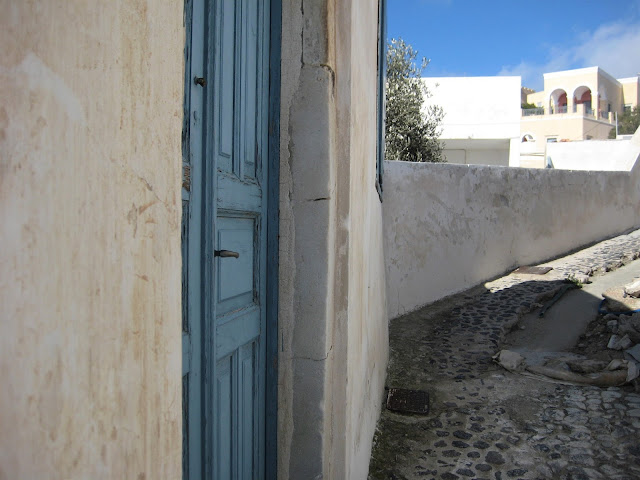 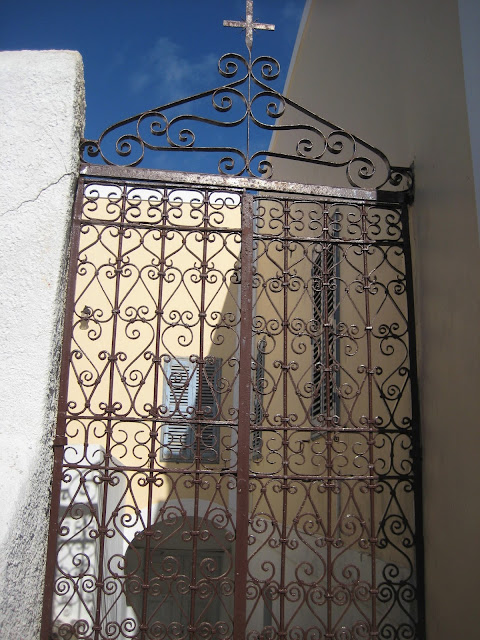 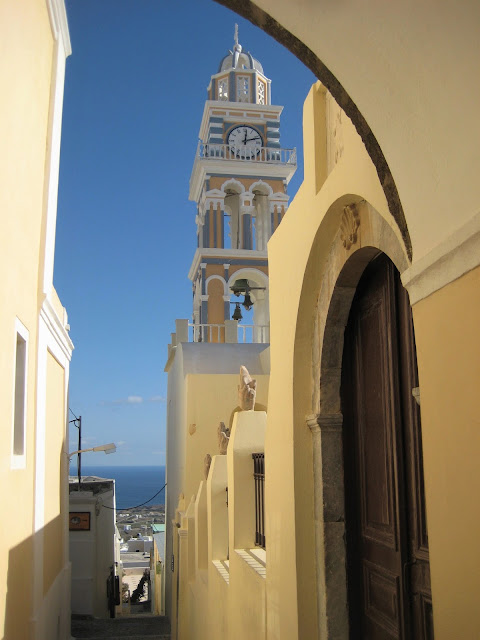 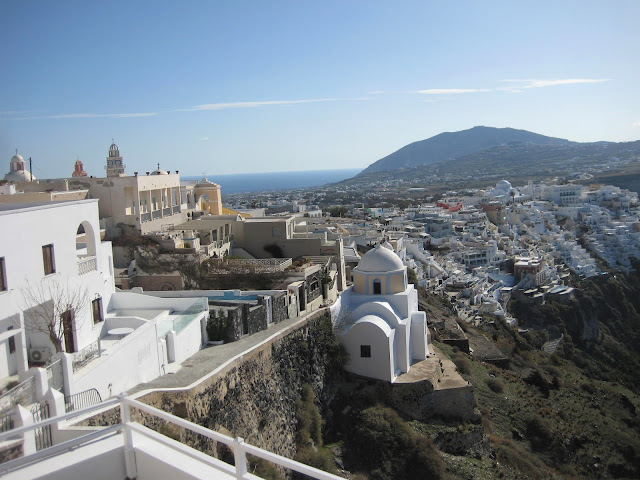 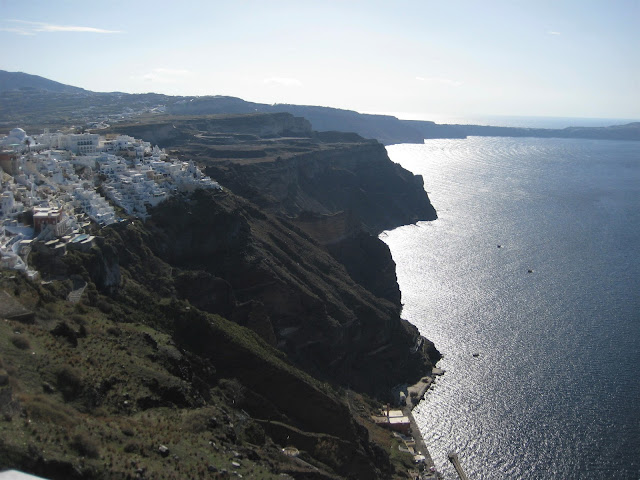 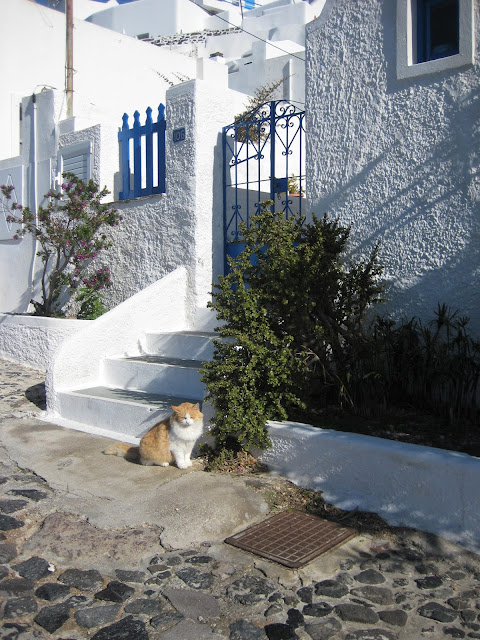 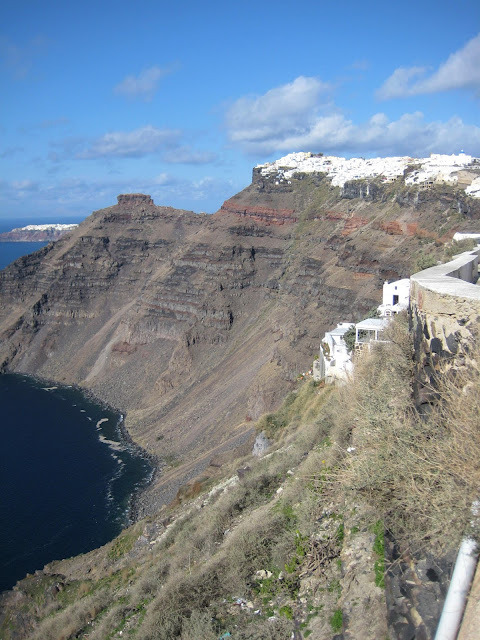 Fira also has a McDonald's. We ate there, and it was delicious. 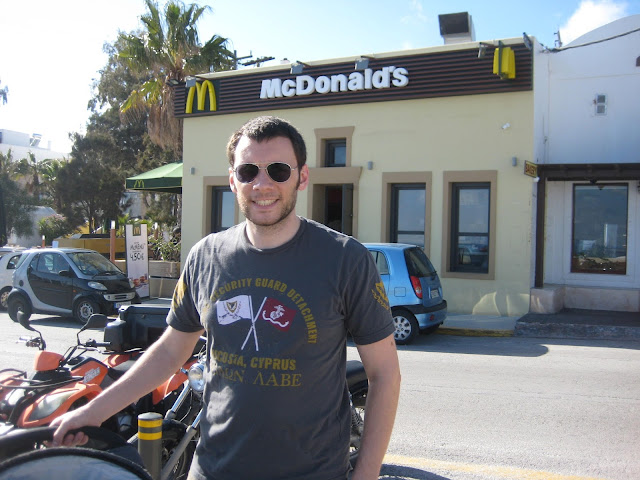 After lunch, we wandered into the next town. I don't remember what it's called, but it was pretty, too. We hiked down the cliffs to a rocky outcrop. With the baby hanging off my chest, it was strenuous. 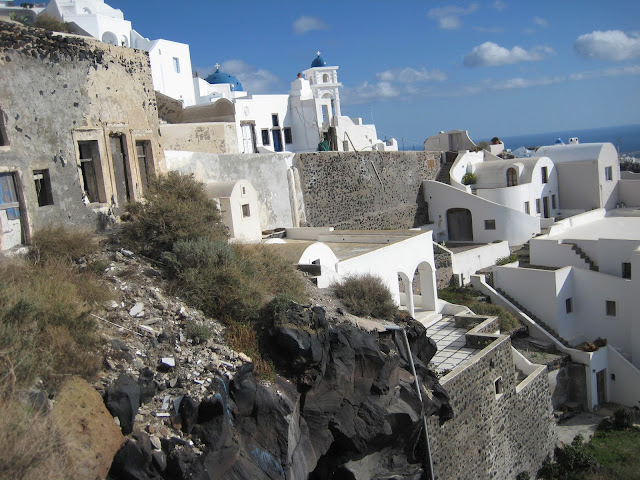 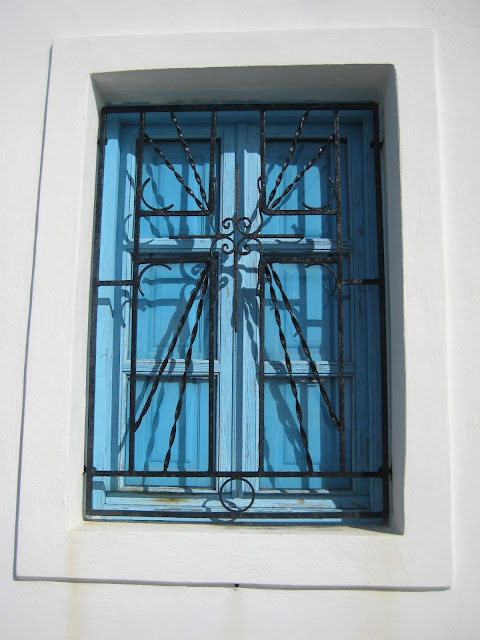 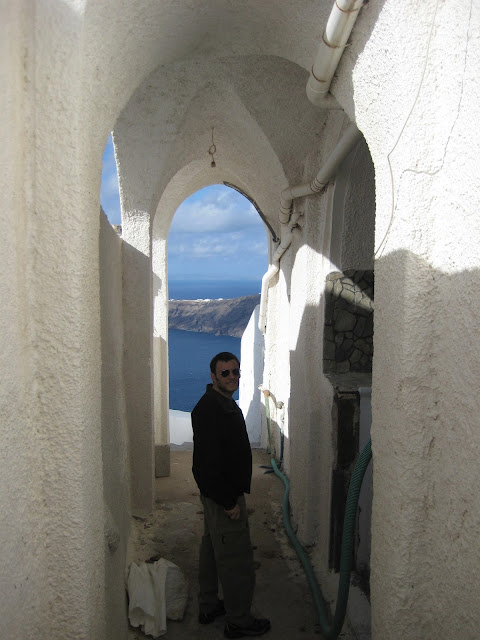 Out on the rock, there was another little, white church. I was sweating aggressively, and don't remember much about it. 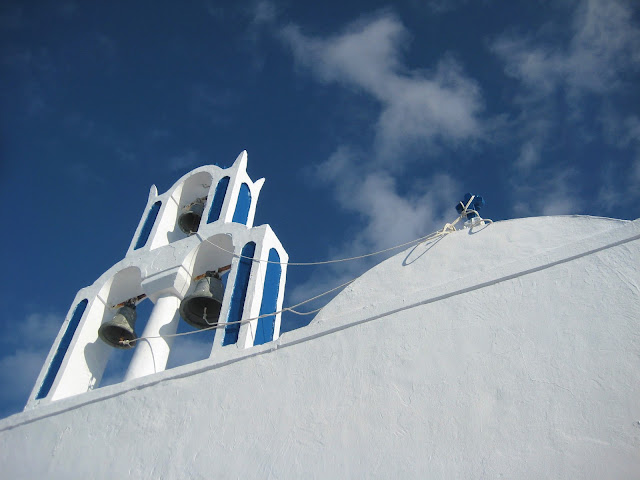 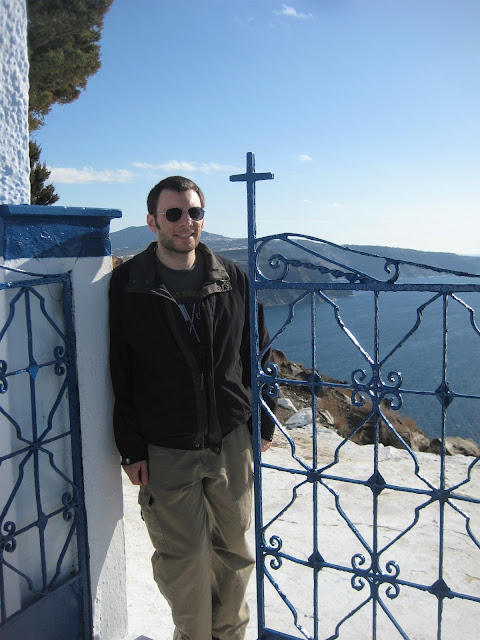 I eventually caved, and let Phil carry the baby. He'd offered to do it at the beginning, but I insisted on being macho because, you know, I'm reactive to authority.

On our way back from the beautiful "Fat Baby Hell Hike," we ran into two Americans who had gotten lost on their way to Oia. There's a walking trail along the edge of the caldera that you can use to get from town to town. The trail passes through all of those incredible whitewashed buildings, and puts you right at the edge of the island. I love the idea of doing that, and I'm sure it's a great experience. On the other hand, it's easy to get lost, it's steep, it's probably boiling hot in the summer, and the sidewalks suck. There's a reason the locals use donkeys to haul stuff around. We squeezed them into our rental car, and drove to Oia as a group.

If Santorini is Jackson Hole, Oia is its main street. This is where Sisterhood of the Traveling Pants was based (the book, and the movie), and it's the place you see most in photographs. The town was 85% tourists, and 15% locals, which is probably similar to what it's like in the summer. It was very quiet while we were there, which was nice. It was also very, very beautiful. There is a reason everyone comes here. It was absolutely thrilling. 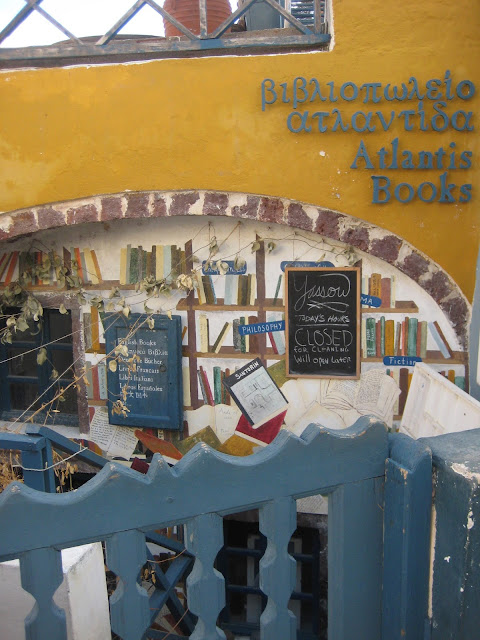 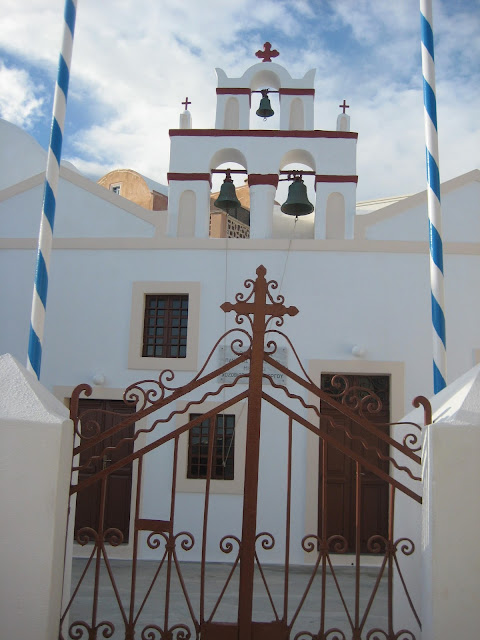 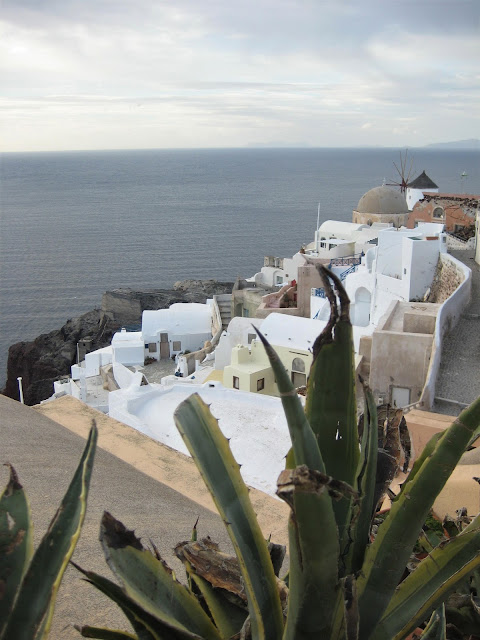 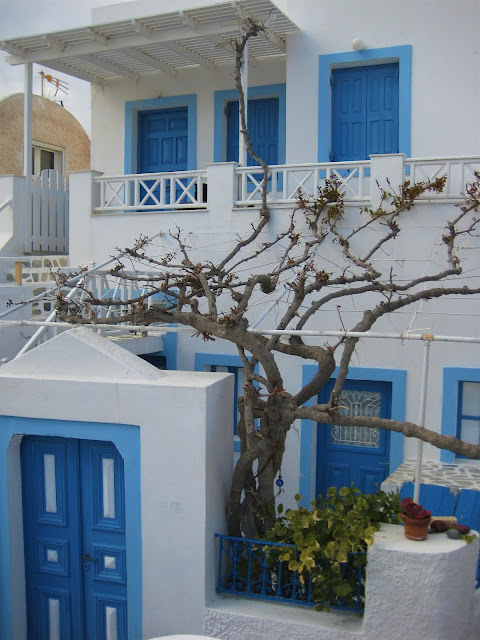 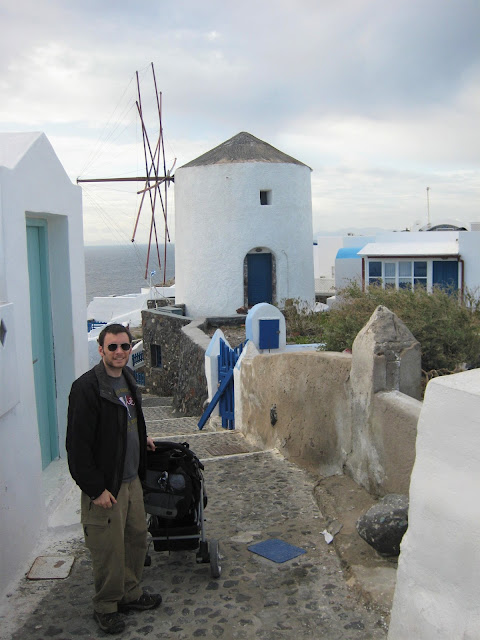 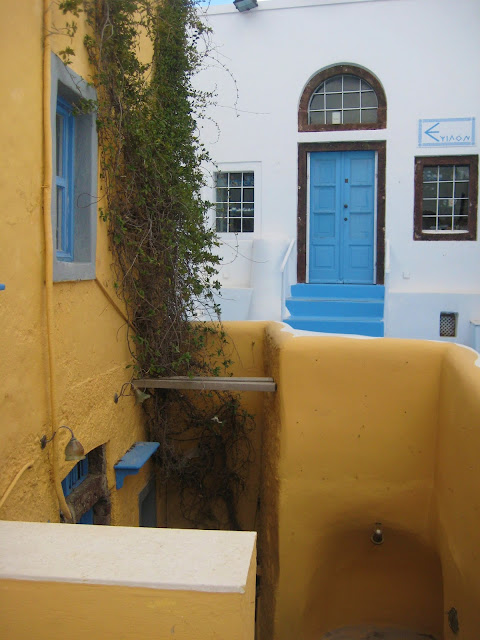 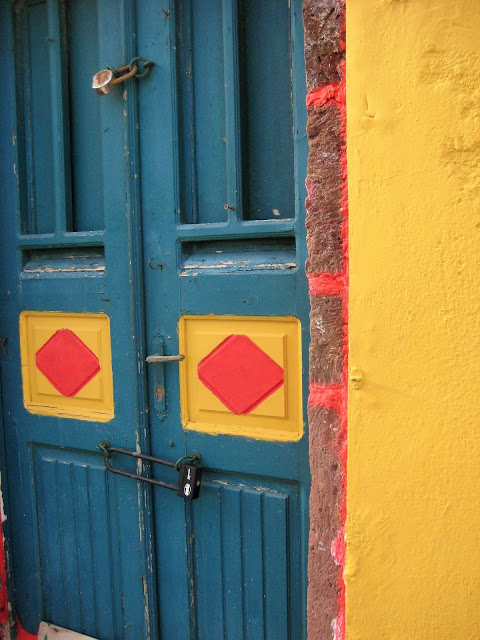 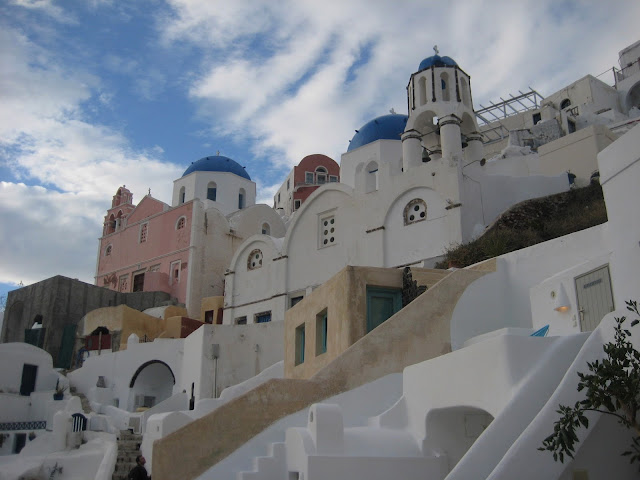 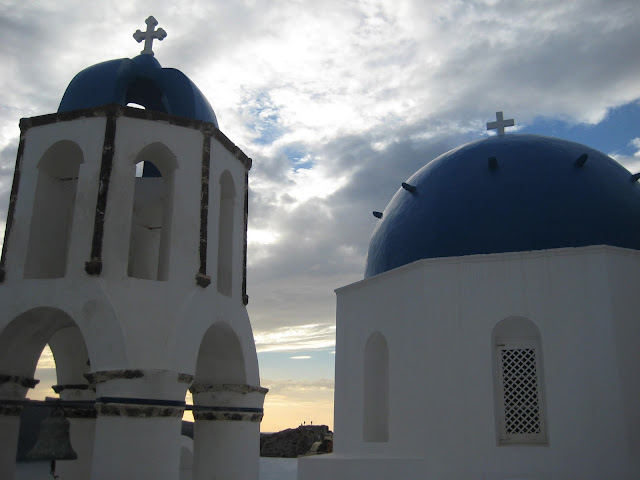 I'm embarrassed to tell you how long it took us to find the "three blue domes" view. It's right off the main path, but we were wandering around those stupid, steep walkways with a fat baby, and a stroller for half an hour before we got there. Finding it was one of the happiest moments of my life. 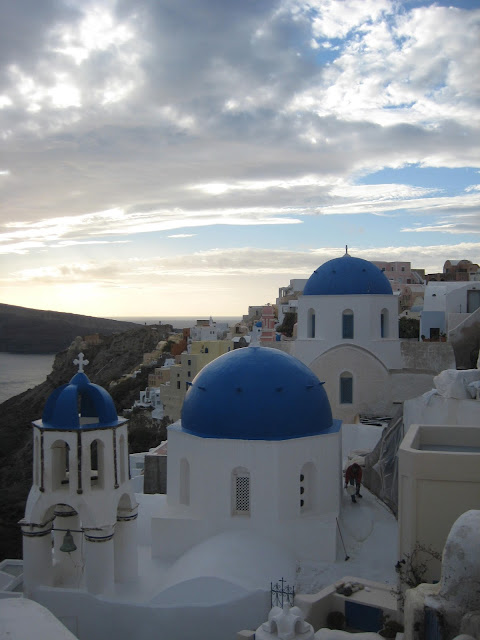 Oia is famous for its sunsets. At dusk, everyone ran down to that outlook in the middle-left of the photo below, trying to catch a good shot for instagram. 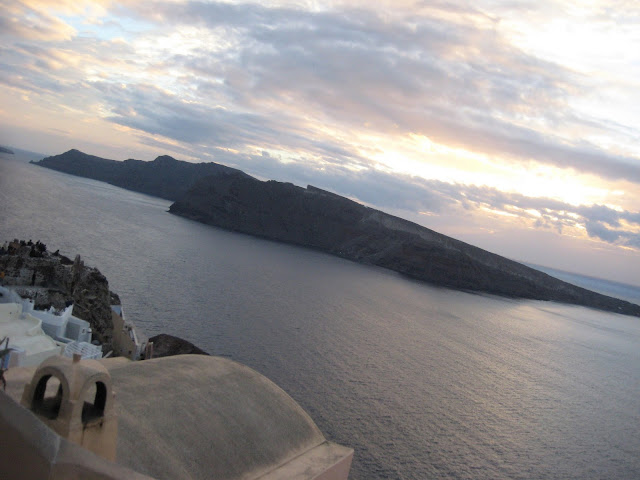 Our last stop, before it got too dark to see, was the fishing village of Ammoudi. Based on looks, it's probably more touristy than fishy.


Okay, so, fine. You were right. You were all right. Santorini is something you shouldn't miss when you're in Greece. It is beautiful. The architecture is gorgeous, and the views are absolutely stunning. The beaches seem to be really nice, and we've heard there are great vineyards. You could happily spend a busy day and a night here, but I wouldn't spend much more time than that. Santorini is what you see most on souvenirs, but it is not the most traditionally Greek. Especially if you go in the high season, you're going to experience a place that's as touristy as the Acropolis in Athens.

Greece is a wonderful, big, beautiful place. There are so many things to see and experience. Take in the sights of Santorini, then go somewhere else and get to know the country better. Talk to the locals. Venture to some of the villages on the mainland. Try visiting a less-trafficked island.

One of the coolest things we experienced on Santorini happened before we'd even left the airport. As Phil and I were picking up our keys from Sixt, one of the competing car rental guys, came out from behind his booth. He crouched down next to our stroller, and started playing with The Kid. He kept walking back and forth between the stroller and his booth to bring more toys to entertain our baby. This went on for about five minutes. As we were about to walk out to the lot, he ran out from his booth one final time, and handed me a small Orthodox charm. He told me to keep it somewhere close to the baby, and patted my arm in a friendly, familiar way. It was such a kind, quintessentially Greek gesture, and it was something that could easily be missed in the rush of suitcases, scooters, and postcard stalls.
Posted by jj at 12:34 PM