This past Friday was Epiphany, a holiday you can read about in greater detail if you scroll all the way back through a year's worth of blog posts. I could link to it here, but I think it will be character building for you to find it on your own.

A few months ago, Phil and I decided we'd like to go to Italy during the holiday weekend. Phil's been to Rome and Florence before. This time, he wanted to see Naples. Phil is an adventurer, traveler, and planner. I'm a homebody. He organizes all of our trips, and I gratefully tag along. For this trip, though, I provided forceful, adamant input. I told Phil I wanted to eat Neapolitan pizza, try Italian gelato, and visit Pompeii. Mission accomplished.

We stayed at the Marriott Renaissance hotel, made possible by a generous contribution from hotel points. The first night was a wash. We arrived late because our plane out of Athens was delayed. Shortly after takeoff, an indicator light showed there was an issue with the aircraft. We had to turn around to the Athens airport and make an emergency landing, which sounds more dangerous and exciting than it was. We landed, they offloaded us, we waited for a half hour, they found another plane, and we took off again. The most surprising part of the experience was how mellow and unaffected people were by the delay. Phil and I tried to theorize about why that was, and we think maybe it's because Naples was a terminal destination for everyone--no connecting flights.

After an unsettled night of trying to get The Kid to shut up and go to sleep for once in his life, we hit the streets of Naples. It was an interesting place. It's sort of like Greece and Germany got drunk together, became pregnant, and gave birth to another drunk country. It was beautiful and dirty, organized and chaotic. The driving was nuts. I liked it.

One of the top sites in the city, according to our muse, Rick Steves, is the Naples National Archaeological Museum. The museum is home to a lot of the stuff that was uncovered in Pompeii. We had to go see that. Along the way, we ran across an old mall thing that was sort of abandoned.

There's another, more famous abandoned mall thing in another area of the city. We saw it from the outside, but didn't go in. It was cold, we were crunched for time, and I needed to eat something. I'm getting ahead of myself. Here's the museum:


Shortly after I took a thousand photos in the museum, I realized my camera was on a really weird setting I'd been experimenting with earlier in the week. Oops. The following photos reflect that setting, in that they're not very good. Sorry.

I originally planned to find and photograph every single work by the Teenage Mutant Ninja Turtle artists after finding a horse head sculpture by Donatello. That plan failed to materialize, so instead I focused on the frescoes recovered from Pompeii and Herculaneum. They were terrifically impressive, but the thing that struck me most of all was the absolutely bonkers faces of the people (and animals) depicted. Phil and I began curating works for our series, pictured below, and titled, Faces of Frescoes: The Pompeii Paintings Who Looked Like They Knew What Was Coming. 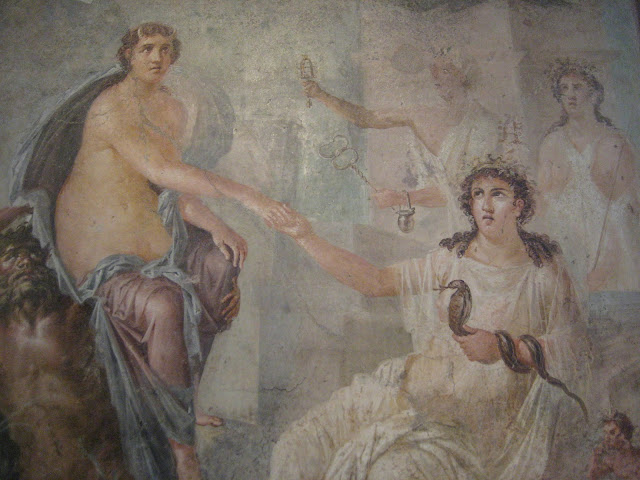 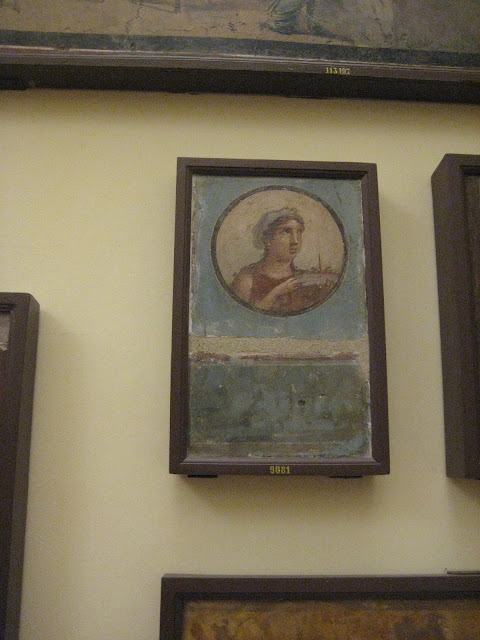 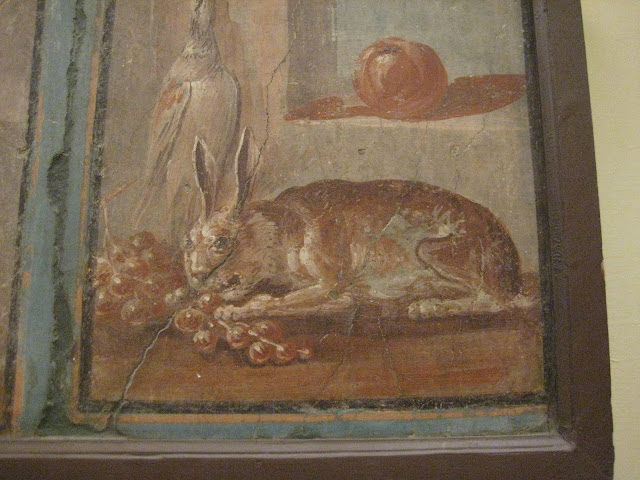 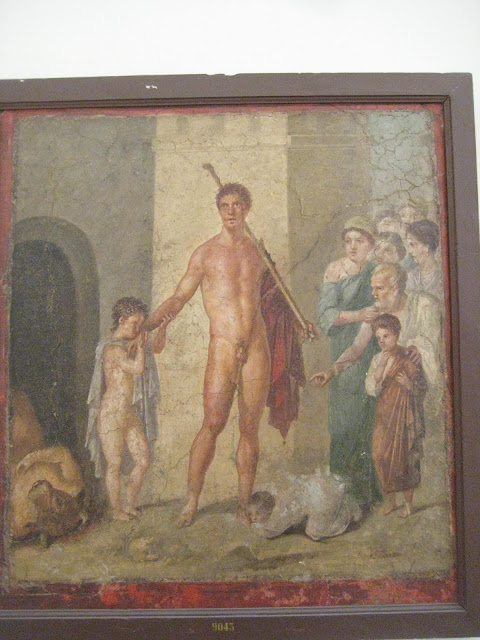 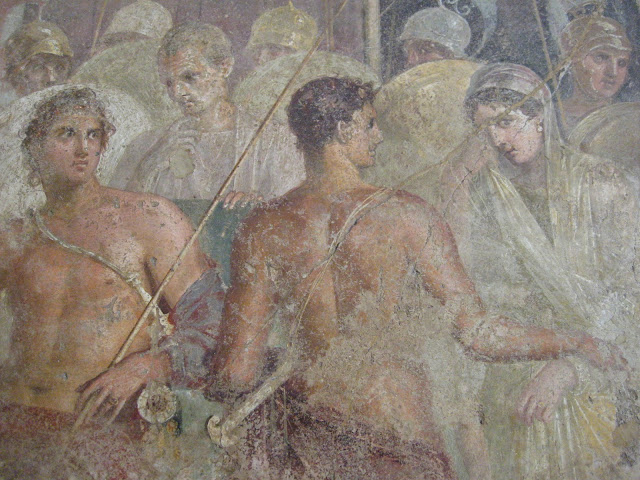 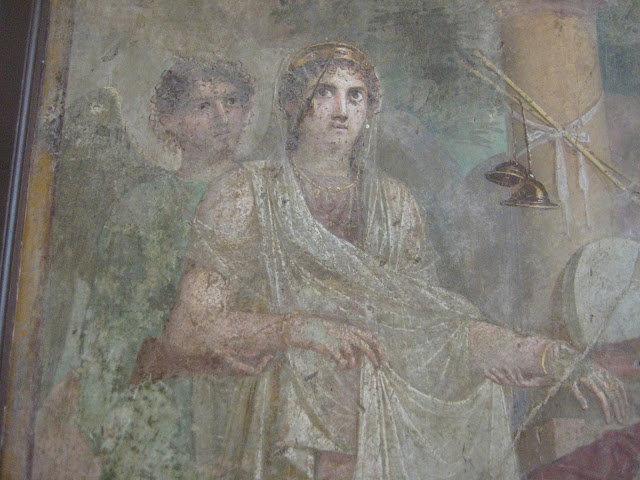 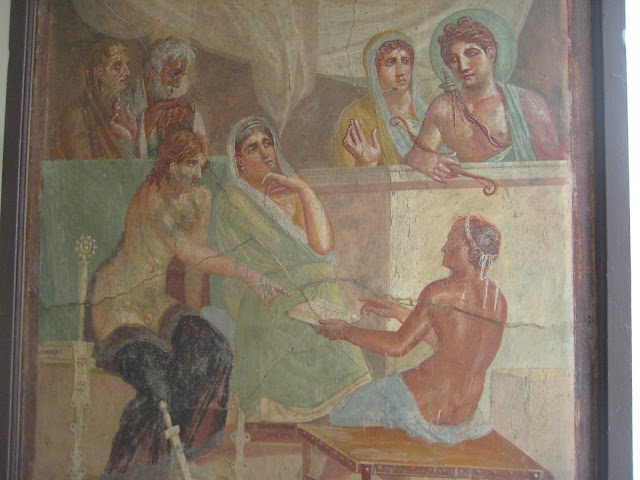 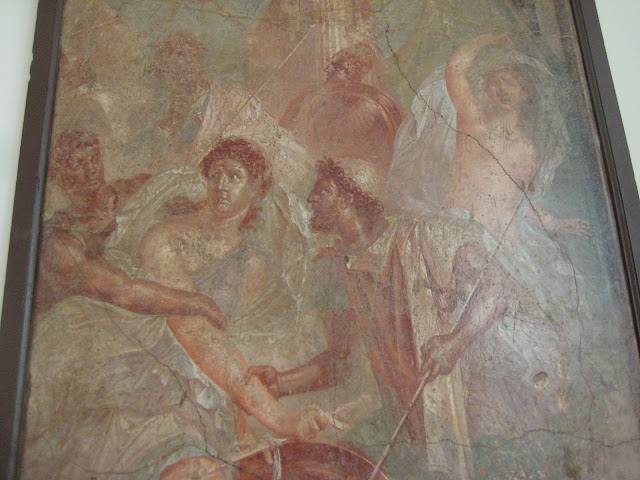 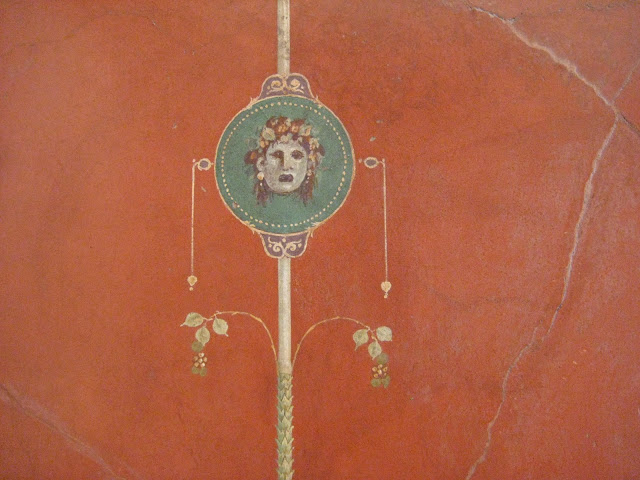 And finally, because this one really deserves a place of honor, my favorite piece of the series: 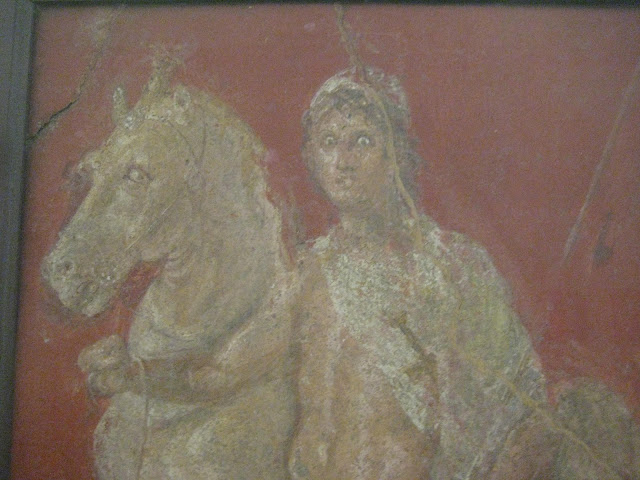 Bizzarro faces notwithstanding, it is mind-blowing to think that these works survived a volcanic eruption and burial. I'll save further commentary for my post about Pompeii, which was just...wow.

We walked down the main tourist drag, where little shops sell Christmas ornaments, keychains, and really adorable wooden creches, and creche pieces. I wanted to buy all of them, so I bought none of them. On our way back to the hotel, we wandered into neighborhoods which, to be honest, were really shadowy and gloomy. Frequently, we'd run across little chapels on the side of the street, like this one: 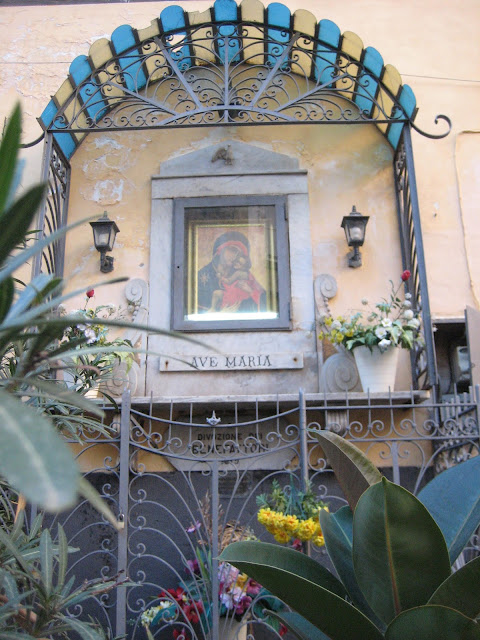 We found a pasta place that was pretty good, and near this castle: 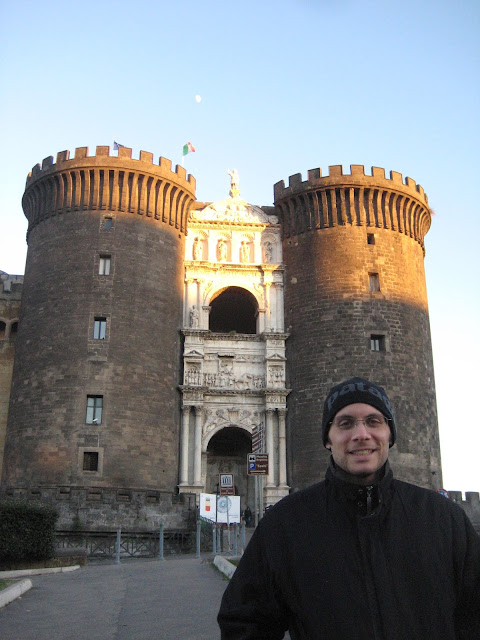 On the other side of the castle, we stopped to talk briefly with a guy who described himself as a refugee from Nigeria. In the eyes of the EU, he would technically be considered a migrant, rather than a refugee. I feel a large exposition of the legal implications of these labels coming on, so I'll hurry and finish this post before it bursts forth. The point is, he was a really nice guy who is having a hard time in Italy because he can't find a job and has to beg. That's the reality of millions of people around the world, and it sucks.

Back to my self-congratulatory, ostentatious display of privilege and comparative wealth--here's the view from the roof of our hotel. It was beautiful.


There is so much more to Naples. I don't think it's fair to say that we even scratched the surface. We smudged it, maybe. But I'm glad we saved time for Pompeii. Teaser: it was amaaaazing.
Posted by jj at 2:11 PM