Happy Monday! How was your weekend? That's great, or that's terrible. I don't actually know how you answered, so imagine an appropriate, empathetic response. Our weekend was fine. We managed to preserve the status quo. In other words, no baby yet. The weather is fantastic. I think it's summer now, but still in the early stages because my face hasn't melted off yet. Tourists are starting to invade. It's fun to go downtown and pick them out of a crowd. I'm really good at it, because they're really bad at blending in. I am, too, but at least I know I blatantly stand out as a foreigner.

On Thursday night, Phil and I went to see My Big Fat Greek Wedding 2 in the local theater. Most of the movies here are in English with Greek subtitles. Animated movies are the exception. They'll usually have one week of English, then Greek for the remainder of the run. I think Star Wars had a Greek translation, but there were English showings the whole time it was in theaters.

My BFGW2 was panned by critics, but we both liked it. It wasn't as funny as the first film, but it was funny enough. Some of the criticism of the movie comes from the fact that it relies heavily on stereotypes. I don't know if Greek Americans mind, but Greek Greeks seemed to find it hilarious. It was interesting to hear the jokes that landed with them. They loved the great grandmother character, and laughed at every scene of hers. They also loved scenes where the whole family would show up to be "supportive" of one of their own.

Phil and I have been in Greece for about ten months. As an outsider making wild generalizations about the locals, I think the movie does a great job of capturing certain elements of Greek culture. If you don't find it funny, then maybe the movie is one of those "you had to be there" things because, seriously, being here makes it so much funnier.

On Saturday, Phil and I joined a group of his colleagues in Marathon for an Earth Day beach cleanup. We met the deputy mayor of the city. He was very gracious. He picked up trash along with the rest of us, and hauled it to the city dumpsters in his own truck. We also got to go on a special tour of the Marathon Run Museum. I've told you all of this before, so just as a brief refresher, the first marathon run was supposedly completed by a messenger dude after the Greeks stopped a Persian invasion against serious odds in Marathon. The dude ran from Marathon to Athens (which would have been a pretty gnarly run back then), announced the victory, then died. Every November, Greece holds the Athens Authentic Marathon with a route that begins in Marathon, and ends in the Panathenaic Stadium in Athens. We were given a great tour of the museum, which houses a lot of Olympic memorabilia. Because we're Specials, our host pulled some of the old Olympic torches out of the cases for us to hold.

Yesterday and today, I've been catching up on everything I need to get done before I drop child. The terrible thing about not knowing when you're suddenly going to become a parent is that the list of "things to do before I suddenly become a parent," keeps growing every day the kid doesn't arrive. I'm half-panicked and half-hoping he'll decide to debut right in the middle of one of my tasks, just to put an end to the madness. I'm being super hyperbolic. Everything is fine.


Here's that mobile up close. This is the view the kid will have soon: 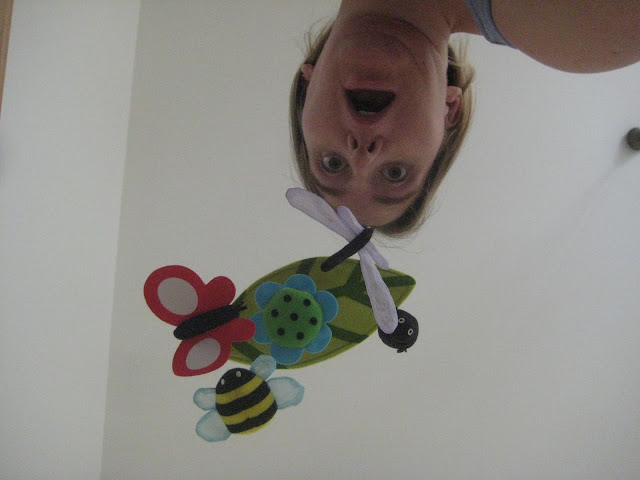