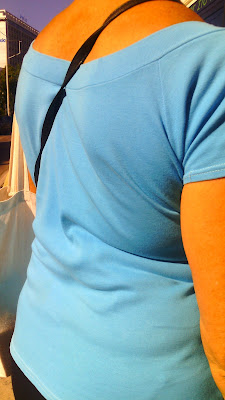 This photo is meant to be a PSA for people who like a large amount of personal space. You will not get it here. I wanted to show you just how close this person was standing to me. When I took this picture with my phone, my wrists were resting against my body. That's how intimate we were.

I took this picture while I was standing in the shade at a bus stop. I had been standing there for several minutes, when this person walked over and stood directly in front of my body. Shade is a coveted thing, and people aren't shy about trying to force you out of it by standing intimidatingly close to you. Side note: I don't think they're actually trying to force you out of it, but because very few people make conversation with strangers, let alone eye contact, it's a bit harder to read non-verbal cues.

For example, let's say you're walking down the street, and you see someone coming toward you on the opposite side of the road. As you get closer, they start crossing over directly toward you. They don't say anything to you, but you're clearly going to run into them unless you can figure out where they're trying to go. And because they don't say anything, and won't make eye contact, it's up to you alone to figure out if they're planning to mug you, hug you, try to sell you something, or ignore you entirely and go through the gate behind you. If you're paranoid, like my dog, you just assume they're out to get you, and yell at them as soon as they get close. I know it's awful, but I sort of enjoy it when people sneak up on my dog, and she barks and scares the shorts off of them. Announce yourself, darn it.

Back to personal space, though. People in Greece aren't as particular about personal space as we are in America. They have no problem standing within inches centimeters of you, if it means they'll get a piece of shade, or a better bus boarding position, or get their fruit weighed at the grocery store before you. If you're sitting on a bench in a high traffic area, you can expect to share every last bit of space it affords. And unlike American, where men often like to give other men buffer zones, the men in Greece don't mind sitting so-close-their-thighs-are-touching next to other men.

I am not at all used to the smaller personal space I get here, but I'm getting better at not assuming people are trying to act aggressively or intimidatingly toward me. Maybe by the time we're back in the States, I'll be the person at the bus stop, getting in all of your faces.

We can only hope.