I want to apologize for every condescending and naive thing I've ever thought about stay-at-home parents. It's not always easy to find time for things like laundry, and vanity blogging. A friend with teenagers assured me that it doesn't get easier.


Lately, we've had visitors. Some of Phil's family was here in mid-July. They fed us, entertained us, and took us to see elephants at a rad wildlife sanctuary. We're great hosts for letting them do all those things for us. We'll let you do the same if you come.


At the end of July, our pediatrician friends came to see us after they attended a wedding in Japan. We loved spending time with them. They also fed us, and attempted to physically prevent me from paying for my own food on their last night in town. It was violent.

In August, Phil went to Jakarta for two weeks. He ran into a lot of his global colleagues, and was able to catch up with them. He heard some wild stories. This is a weird lifestyle. The Kid and I stayed behind in Bangkok, and went on a few local adventures. We also watched a lot of Netflix.

This month, September, my mom came to visit. She's actually still here, though this is the final week of her stay. She's been taking care of everything. I can feel the dread of her departure creeping into my soul. Who's going to do the potty training?

I DON'T HAVE A PHOTO FOR THIS, BECAUSE IT'S STILL HAPPENING.


In the past few months, we've been able to visit some new places. One was a lovely, manufactured garden resort about an hour outside of Bangkok. Another was the Marriott resort on the beach in Rayong. Last week, we went to Koh Samui. We've also been to some great grocery stores.

Yesterday, we received the official list of open positions for Phil's next assignment. We could land in Africa, Asia, North America, Europe, South America, or Australia before the end of 2019. The final placement decision is out of our hands, but we do get to submit a bid list, with a rank order of which positions we'd prefer. This year, we're jumping through an extra hoop, thanks to a Class 2 medical clearance. Our next post has to be able to support my delicate constitution. "You have no compassion for my poor nerves." (Mrs. Bennet, Pride and Prejudice). Before we can bid, we have to get an extra approval, explicitly okaying which positions are open for us.

When we're finally able to bid, we ought to have a little contest regarding the outcome. Maybe a wager about where we'll move. Let's all think some more about this, and circle back soon with a plan. 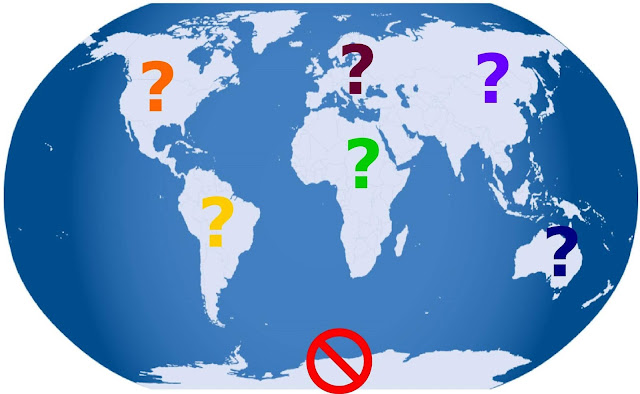 I'm sorry to report that nap time has ended, and despite the two other available adults sitting less than 3m away from me and my computer, I have still been marked as the chosen one, so I've gotta wrap this sh*t up.

~I have so `much more I want to say, but my key1ho1board is no longer mine.aaaaaaaaaaaa

For my birthday earlier this year, we went to Khao Lak. Only those in our innermost circle will be able to date that, which is by intention. I always want you to be under the impression that we're on top of this blog, sporadic updates aside.

I have a theory that if you want to find a good beach, you have to follow a German. Khao Lak is a beautiful, coastal area, very popular among German, and other European tourists. It's just north of Phuket, and is much less crowded and noisy. The beaches are lovely. Khao Lak is a well-known jumping off point for diving, with several nearby national parks, nice and plentiful accommodations, and close enough proximity to Phuket that you can pop over for a day tour. I don't know why I'm trying to sell you on this place, because a large part of Khao Lak's appeal is that most tourists don't know about it. Stay away.


We spent most of our trip hanging out on Khao Lak's beaches, but we did a slight bit of touring, including in the city of Phuket. It was interesting, and fun, and sad, and astonishing, and really, really beautiful. I've broken our photographs down into four sections. The majority are pics of the beach, but there are some other things I want you to see, and know.

I want to get this out of the way at the outset, because it's hard to read about, and hard to write about. On December 26, 2004, an earthquake struck off the coast of Indonesia, triggering several massive tsunamis in the Indian Ocean. The waves slammed into southwest Thailand around 10am. Thousands of people died, but the hardest hit area was Phang Nga Province, which includes Khao Lak. The run-up was large, and the waves reached 2km inland. Entire fishing villages were devastated. I had a classmate who died in Khao Lak that day, which is one of many reasons I've wanted to visit the area.

It's hard to understand the degree of devastation that occurred in Khao Lak, particularly when you're not familiar with the history, but there are several obvious reminders of what happened. Some of the vegetation near the shore has big gouges and deep scarring. Several small, locally-run museums have popped up, with photographs and videos from the disaster. There's a tsunami warning system, and new infrastructure to prevent a similar disaster. And there are tsunami memorials.

I have read a lot about the 2004 Indian Ocean tsunami. I have watched a lot about it, and I have thought a lot about it. I am thankful we were able to visit Khao Lak, and see some of the recovery that has taken place, though it is still hard to understand.

Now that you're educated, and sad, let me show you something from the party that is Phuket. We only spent half a day on/in Phuket, and the most photogenic thing we saw there was the Big Buddha. It's exactly what its name implies...a very big Buddha. The statue sits on top of a hill, with panoramic views of Phuket from the top. It was built as a community effort through donations, and is only about 10-15 years old, with construction ongoing. It's a pretty place, and a site of worship for some, but it's also super touristy. 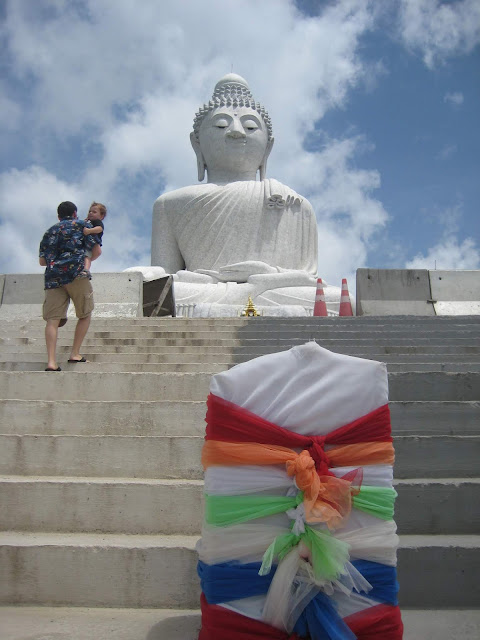 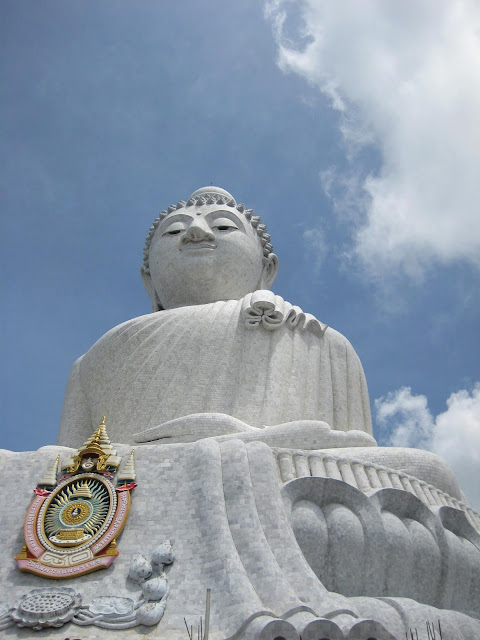 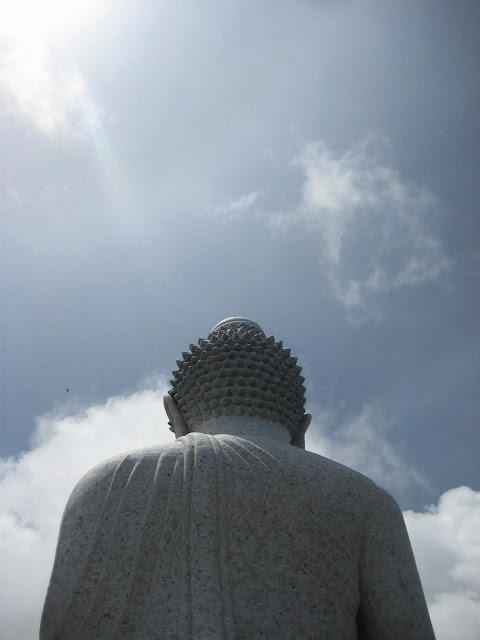 The Big Buddha in Phuket draws a weird mix of supplicants and sightseers, but that seems to be par for the course when it comes to the well-known temples in Thailand. We liked it. We were glad we went.

On the way back to Khao Lak from Phuket, we stopped at an overlook of the Phang Nga Bay. This place has been featured in a few movies, including one of the James Bond shows. I don't know which. Google says The Man with the Golden Gun. Sure. A lot of people (most people?) take a boat tour of the bay, but we had limited time and a toddler. We found an overlook. It was an outstanding view.

As an unrelated, but cool, aside, this area of Thailand boasts a significant rubber production industry. There were rubber trees everywhere. This is notable, because The Kid kept yelling, "Wuhbba Kwees," while we drove, and it was adorable.

The beaches. Oh, the beaches. What can I say about the beaches? Why don't we let the beaches speak for themselves. This is convenient, because I am tired of writing. Enjoy Khao Lak. 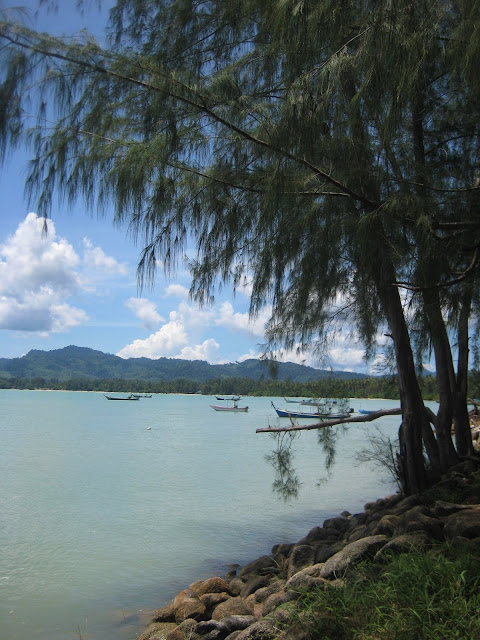 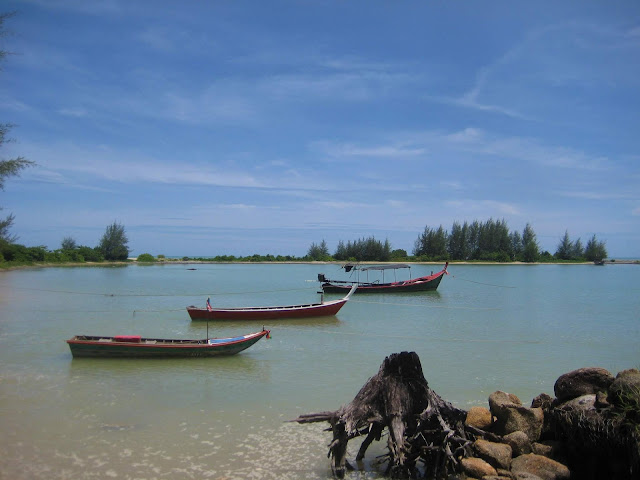 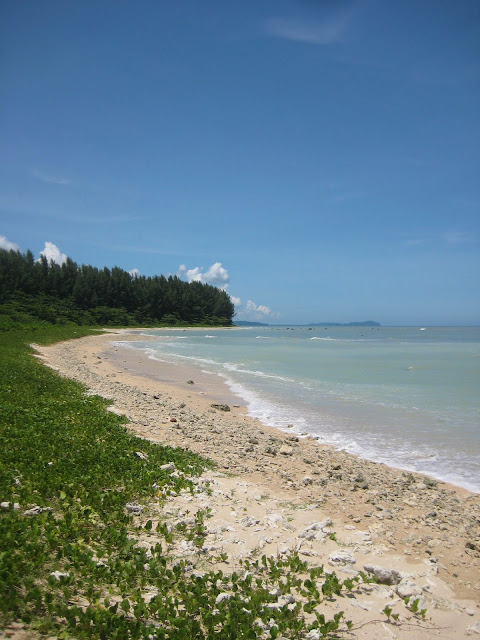 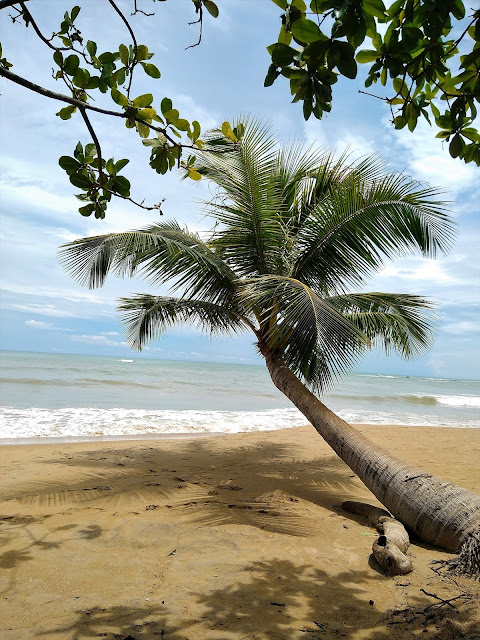 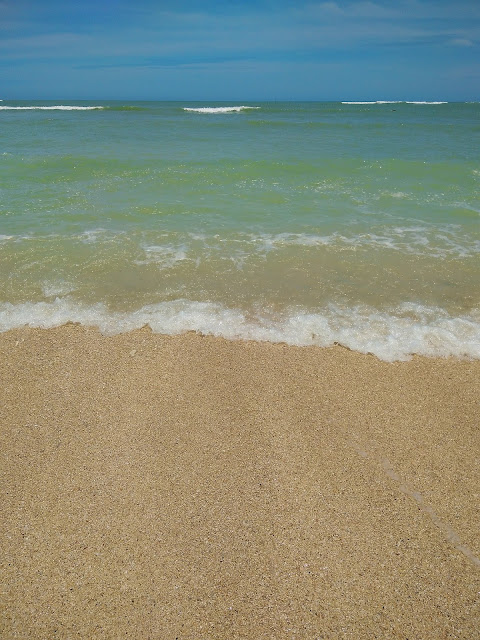 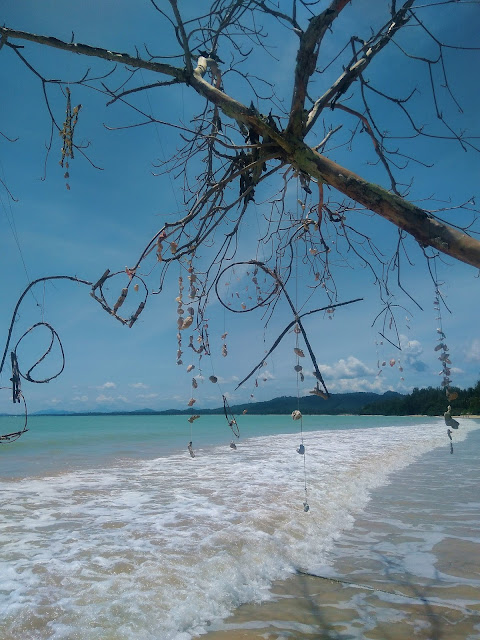 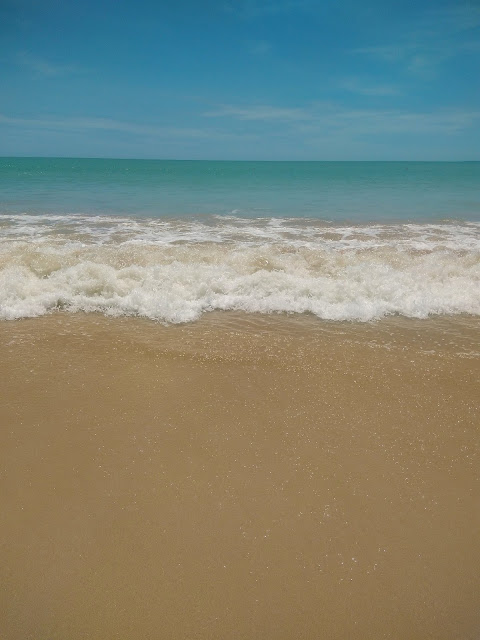 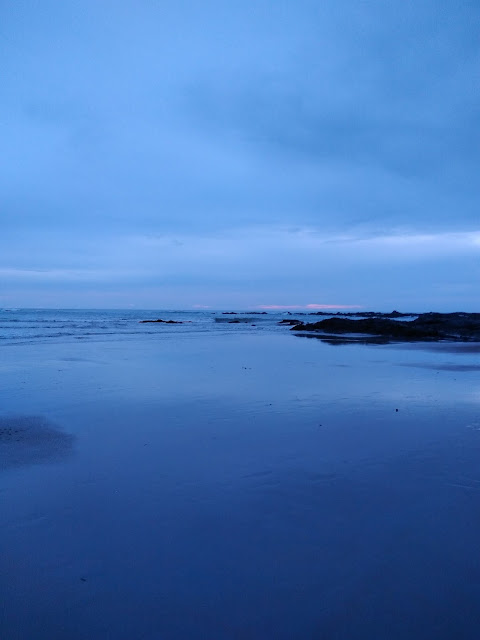 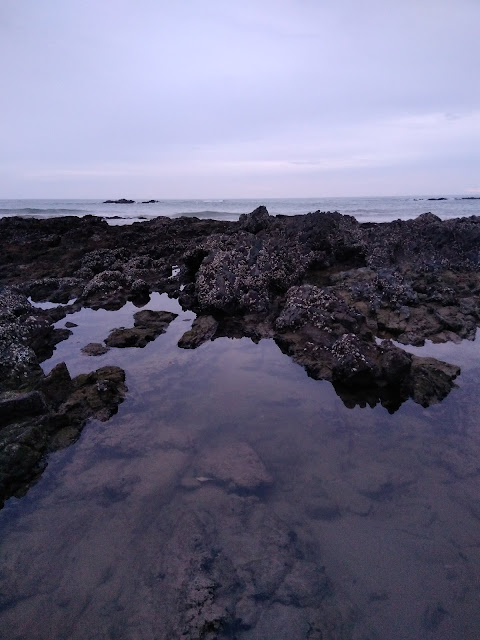