What the Wat: Wat Saket, The Golden Mount

Ten thousand years ago, The Kid and I went to Wat Saket. Our friend organized the trip. She figured out how to get to the temple via water taxi, so we rode a boat down the khlong. I'd never have done that on my own, but it's easier to do terrifying things when you're with someone braver than you.

Getting on and off the boat was frightening, because we had to clamber into the thing from the pier with our kids, and all of our associated kid gear. The boats bob up and down in the water, as boats do, and it's a pretty big step down from the pier to the deck. You have to do a sort of simultaneous duck and swing to clear the roof. Normally, they load and unload the water taxis at an alarming pace, but everyone took pity on us, and went slow. It was an exciting, inexpensive ride, and an easy way to get to the Golden Mount.

Wat Saket, or the Golden Mount, is a temple in the center of Bangkok. Its name comes from the golden stupa of the temple, which rests on top of a man-made hill. A stupa, as I just learned from Google, is a structure that contains relics of Buddhist monks. In Thailand, stupas are often called chedis. This particular chedi is said to contain relics of the Buddha. 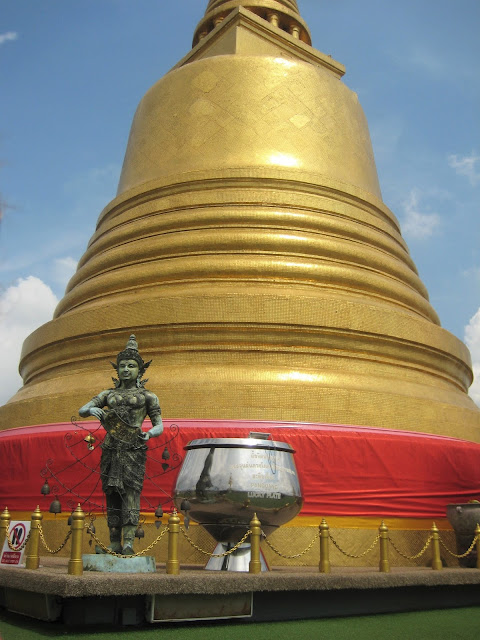 There has been a temple at Wat Saket for hundreds of years, but the current temple, the hill, and the golden chedi on top of the hill, are relatively recent additions. In the 1800s, King Rama III ordered construction of a massive chedi. The ground was not accommodating. Bangkok soil is boggy and soft. Rama III's chedi collapsed during construction. As nature began to retake the chedi, a hill formed. In the late 1800s, a new, smaller chedi was built on top of the old, collapsed one. The current temple at Wat Saket was built in the early 1900s, and the hill with the chedi was reinforced in the 1940s.


The temple site is large and quiet. To get to the chedi, you have to walk up a winding set of stairs. There are 300 in total, but they're small, easy stairs. The four year old in our group was able to walk all of them, and the two year old made it halfway before quitting. Along the route are various objects for worship and meditation--probably. I'm not very familiar with Buddhism, so I don't have much insight into the symbolism. It's very lovely and peaceful, so I appreciated it in a base sense. 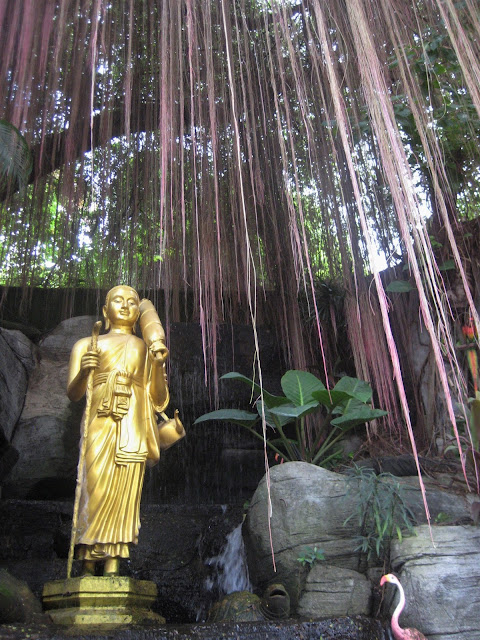 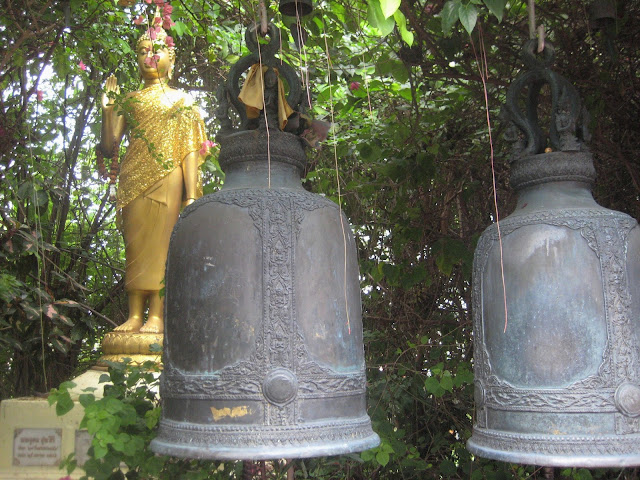 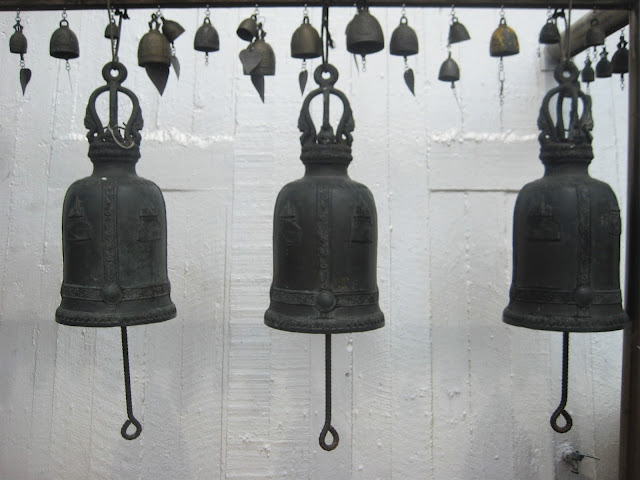 Buddhists come to Wat Saket to worship. It's a tourist attraction for the rest of us because of the view from the top. 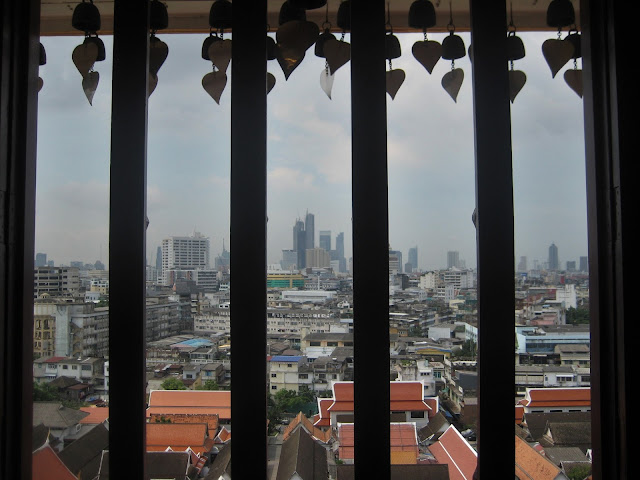 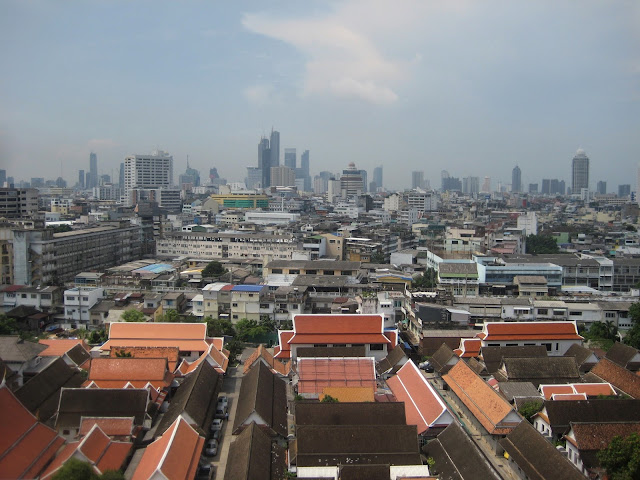 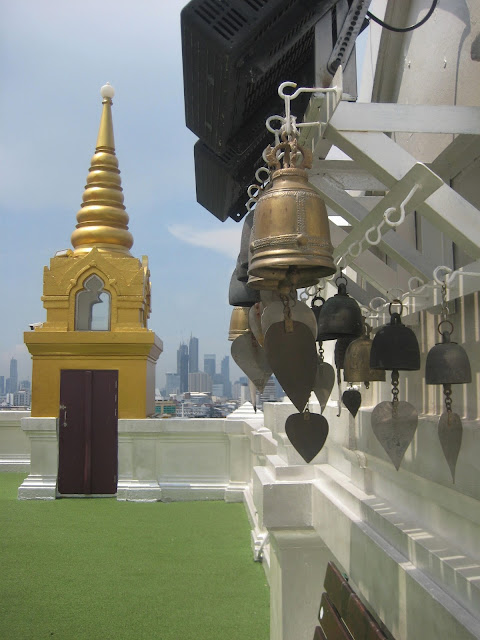 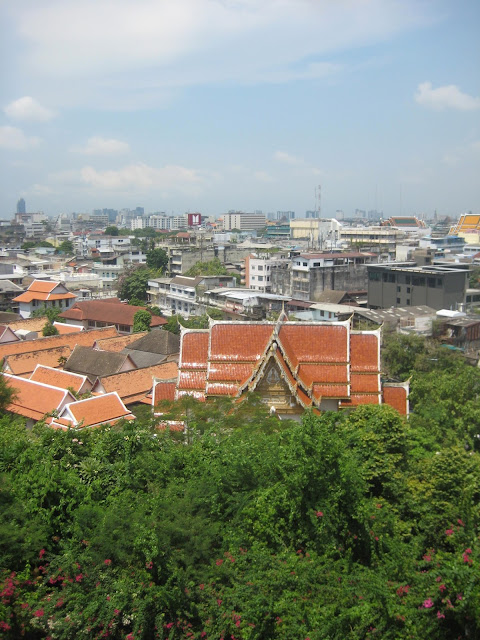 We went on a beautiful day, and were able to take advantage of a nice breeze. I love visiting temples when there's a breeze, because you can hear all of the little and big bells blowing in the wind.


On the way down, The Kid took his first photograph for the blog:


One very interesting feature of Wat Saket is the burial ground on the side of the hill. Some of the memorials are built for patrons of the temple. I don't know if patrons is the correct word. It will have to stand, because I don't know the correct word. Some are for people who were cremated here. And some are for plague victims. Wat Saket was a burial site for around 60,000 of Thailand's plague victims during the late 1700s. We sat near the base of the cemetery while we took a snack break. It would have been interesting to look around it more, but I was very hot. 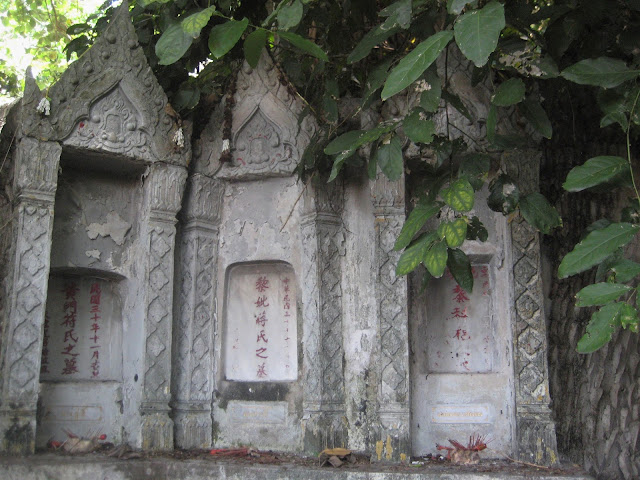 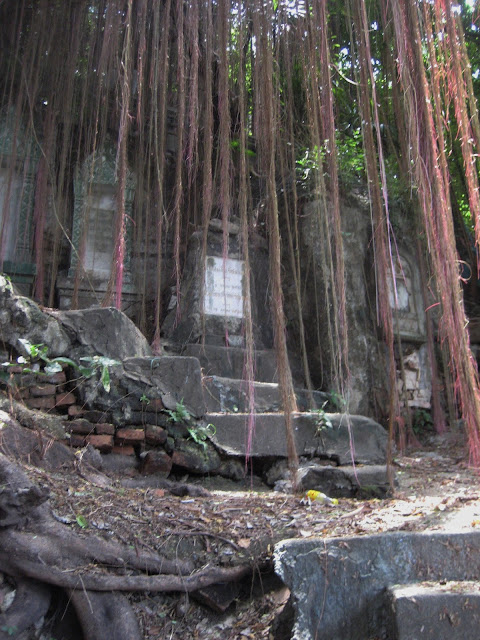 Wat Saket was not on my radar until my friend planned this outing. It was a trip worth taking, and something I'd recommend to anyone spending more than a day or two in Bangkok. During Loy Krathong in November, there's a big temple festival at the site. Depending on whether you like crowds of people, or not, that might be an interesting time to go. I'd be tempted, but only slightly. And only if someone else planned the logistics.
Posted by jj at 10:42 AM No comments: