I'm typing this post from the brand new porch swing on our living room balcony. My mom insisted on purchasing it for her time here. She flew away this weekend, and we miss her.

While my mom was here, we decided to go for regular, exploratory jaunts into the mountains. We only did it twice, but both times were really lovely.

The mountains in Athens are usually ignored by tourists, which is both a shame and a delight. It's a shame that they miss the view, but it's a delight to keep it from them. There are three big mountains in Athens: Hymettos, Penteli, and Parnitha. Each mountain is crammed with stuff you'd probably only care about it you allocated plenty of time to your tour of Greece, or if you're a mountain nut with a car.

Hymettos is a long mountain just east of Athens. It stands between the city and the airport, and you'll probably drive around the base of it if you visit. Hymettos is home to that cool cave Phil and I visited earlier this year. The mountain is used for the cultivation of thyme honey, and houses several landfills (hopefully nonadjacent). Like most prominent landmasses in the area, Hymettos served as a great location for monasteries. The Kaisariani Monastery is open to visitors, and seems to be pretty popular. Hymettos was stripped naked by fires and deforestation, until the early 1900s when a local group began to reseed the mountainside. Today, there is a beautiful forest, with nice walking trails, and panoramic views of Attica. 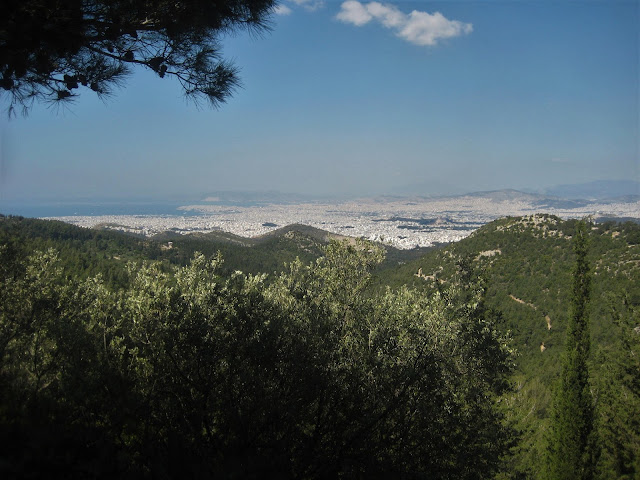 Parnitha is north of Athens. It's the tallest mountain in Attica, which I thought was pretty impressive until I saw how far down on the list it is compared to other mountains in Greece. Most of the mountain is designated as a national park. Phil and I visited part of the mountain last fall. It's a massive area to explore, with climbing, hiking, gambling, monasteries, deer, and various old things.

My mom and I swung around the base of the mountain to get to an old fortress on the edge. Fili Fortress is a military installation from 4th century BC, built on the ruins of even older stuff. It's not clear who built it, but it's in an obviously strategic location. It reminds me of a bundt pan; the fortress sits on the high part in the middle, separated from the mountains walls on all sides by a steep valley. Oh, jeez, now I want cake. For fifteen minutes, we were the only ones at the fortress, until some old dude tourists pulled up in a car. I think that must have been an anomaly. We hardly saw anyone during our whole mountain excursion. 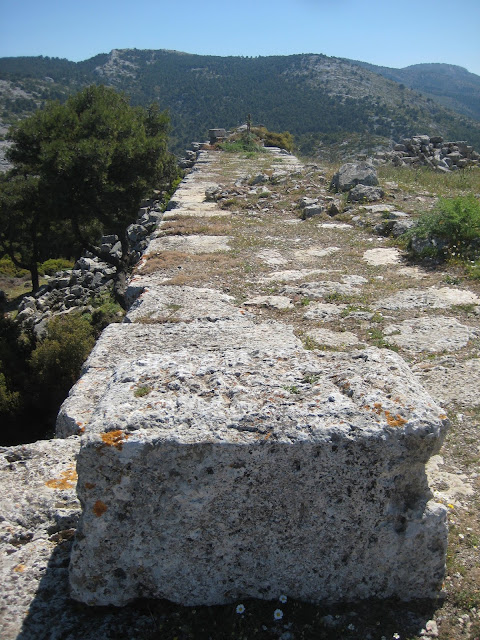 After the fortress, we tried driving the mountain roads to get to the national park. The roads were not ideal. When our navigation informed us that we'd be wandering for another two hours before we reached our destination, we gave up, and wound back the way we came. We eventually made it to the same places Phil and I visited.


One site we visited is called Mola. There's an old chapel right off the road, with a few good hiking trails nearby. Mola is the site of one of Parnitha's natural springs. Parnitha's springs used to supply the city of Athens with water through Hadrian's Aqueduct, an old thing that I've photographed before, but will photograph again sometime if you beg me.


We weren't able to make it to Penteli while my mom was here. Mount Pentelicus is north of Athens, and separates Athens from Marathon. You are, of course, familiar with the story of the original marathon by now, since I've told it to you more than probably any other story I've ever told in my life. Bearing the mountain in mind, it's no wonder the first marathoner dropped dead after he delivered his message in Athens. The Athens Classic Marathon is uphill for 21km, and is said to be one of the most difficult courses in the world. If you're not a runner, you can go for the views, the monasteries, and a distant glimpse of the ancient quarry where they obtained marble for the Acropolis.