I just got back from church. Phil was teasing me about how in the two years I've lived across the street from it, I've never been inside, and that goaded me into action. Why do I only do things when dared? Let's analyze that later.

The interior design of the church is relatively simple, compared to other Orthodox churches I've visited. Most of the walls, and the inner part of the domes (which Google tells me are called intrados), are plain white. The iconostasis, which screens the altar, is big and gold, and so are the icons. There were royal purple ribbons draped around the church, in honor of Lent, and the Christ effigy was at the very front. I couldn't tell if people were already leaving flowers with it. My hunch is that they were, but I was in the back, and I'm short, so I have no visual confirmation of this.

The effigy was a wooden cross with gold embellishments. At the top of the cross were the letters "INRI." These letters stand for the latin phrase that was written over Jesus: "Jesus of Nazareth, the King of the Jews." I am leaning heavily on Google tonight.

An icon of Christ hung on the cross. There were two big, lit candles affixed at the extreme of each arm of the cross. I arrived in the middle of a full-blown liturgy. I didn't understand any of it, but it was nice to be there. There were chairs set up to accommodate a good number of people, but there were a lot of us standing, too. Occasionally, the people in the chairs would stand up for a part of the service. At one point, everyone stood, and the father was clearly reading a prayer. When he finished, I decided to leave. As of fifteen minutes ago, when I started writing this post, the liturgy was still going.

I'm heading to bed now. I have a cold, and the smell of tree sap, stuck in my head. Tomorrow, I'll try to go back to church before they hold the Good Friday liturgy, and see the effigy covered in flowers. If there are other fake ones, maybe I'll leave our wreath. 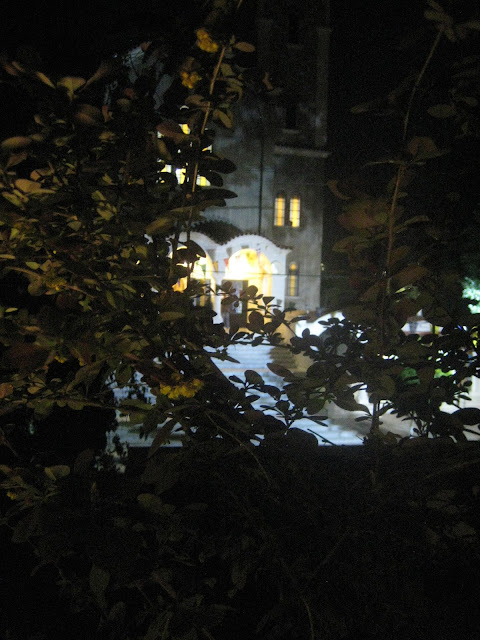