Here are a few things we've done lately. Lately, in this case, refers to the past month. I wanted to tell you these things earlier, but life intrudes.

1. Phil finished his first 5k race. The 5k was part of the Athens Classic Marathon. He had a great time at the event. He said it was a lot of fun, though he still hates running. The Kid and I stayed home because we're no fun. I tried making a bunch of muffins, and a fun banner. When Phil came home, the kitchen was a mess, The Kid was crying, the muffins were just okay, and the banner said, "LIHP ROF YAY," because I taped it backward.


2. I sort of made Indian food, and it was sort of good. It's about what you'd expect from a last-minute online recipe search, but it filled the hole.

3. Greece started decorating for Christmas. What you see below is the minutest, most unnoticeable example of that, but I love the St. Filothei Monastery, and I wanted you to see it at night with globe string lights. I am still trying to figure out where this particular site fits into Filothei's history. I think it is possibly the convent where she was brought after being beaten, and eventually succumbed to her injuries. Not the happiest site, but really meaningful. Filothei was such a cool woman. 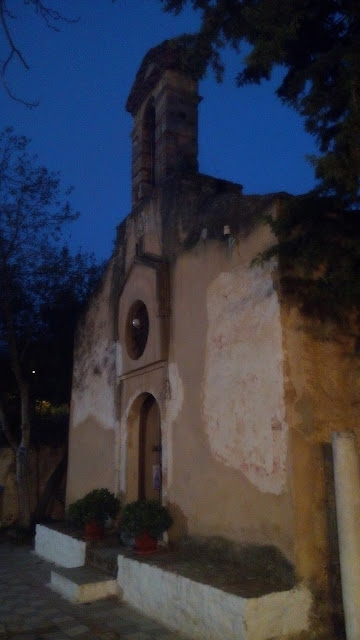 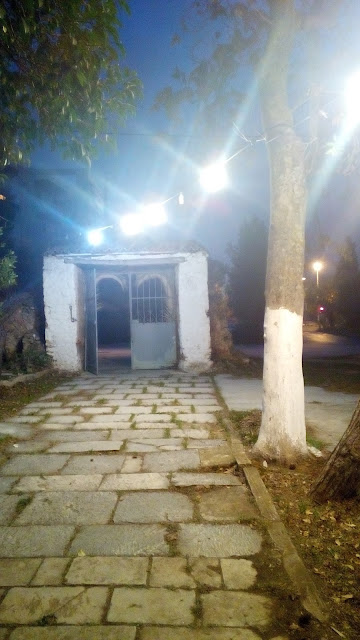 4, Easily the best thing that's happened recently was President Obama's visit to Athens. He held a Meet and Greet for embassy staff, and family members of American employees. We had to wake up really early, go through a ton of security and wait for a few hours in the cold (legitimate cold, not typical Athenian November cold) to see the man for fifteen minutes. It was worth it. He gave a short speech, and spent the rest of the time talking to people. The highlight of the event was when he held the babies. I'll spare you the details, mainly because I was too excited to form concrete memories, but HE HELD MY CHILD! I've never been as starstruck in my life. Everyone was so excited. People took dozens of photos. For a week after the event, we had photos pouring in from friends and neighbors. We collected some great shots. I'm not going to post any of them below. Instead, I'll share a crappy one I took when the Ambassador was introducing President Obama at the beginning of the event. If you're someone I know, and you want to see the good ones, let me know. I will happily share.

5. Easily the worst thing that's happened recently is The Kid's hospitalization. Before you panic, he's doing okay. On Monday, he went through a scheduled procedure, and we were able to leave the hospital that evening. He woke up on Tuesday with a fever, and we came back to the hospital on Wednesday. They're not sure if it's viral or bacterial, so they're treating it as if it's the bubonic plague. Just kidding, but not much. It's seems ludicrous to complain about the excellent care we're receiving, but we're still pretty fed up with the fact that we've been hospitalized for this long (and are still, hospitalized, by the way). I'm currently writing you from the couch in his room. I'm steadily becoming more belligerent, which is always an interesting state in which to experience me. I'm trying not to direct it toward the nurses, who are kind, following direct orders, and aren't paid enough to deal with it. As a result, the doctors are taking the brunt. Pray for them. Pray for us all.