We have mold in our house.

It's pretty bad. The Facilities guys had to refer it to the Housing guys who had to refer it to an outside contractor, who was pretty shocked when he saw the amount of work he'll have to do. He referred it back to Housing, who approved the cleaning process.

We'll have to leave our house for 2 days while they scrape out the HVAC.

Very luckily, we had already planned a short jaunt during the time that they'll be cleaning. Bella will be with her favorite dog-minder here in Greece. My mom, who is visiting, will be jaunting with us.

Don't bother breaking into our house. There will be guys and mold everywhere.

We'll return next week.
-Phil, Jane, The Kid, Bella, and My Mom, but not The Mold, which will not be returning.

Email ThisBlogThis!Share to TwitterShare to FacebookShare to Pinterest
Labels: mold in HVAC

Phil is out of town again, and Bella is terrible. Despite the fact that I bought her, brush her, bathe her, and take her on walks, Phil is the Alpha. As soon as he leaves, Bella becomes extremely anxious, and aggressive to strangers. She barks at everything, and sometimes nothing. Today, she lunged at an old man because he dared to look at her.

Today, I invented lyrics to the tune of a kid's song about kicking her out of the house. I can't remember the song or the lyrics, but it was good.

Every time I'm about to explode, she goes and does something like this: 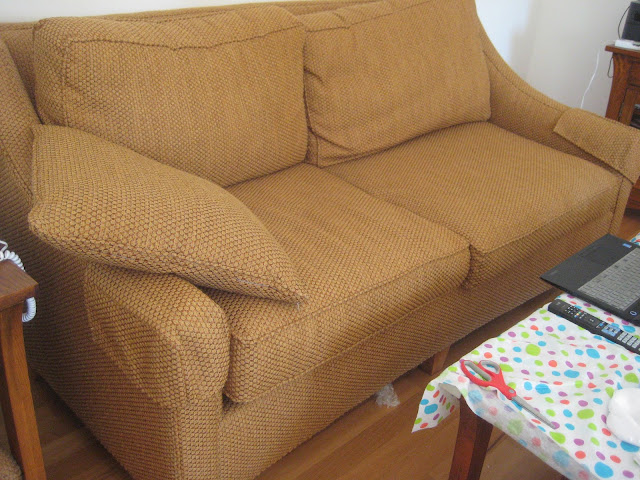 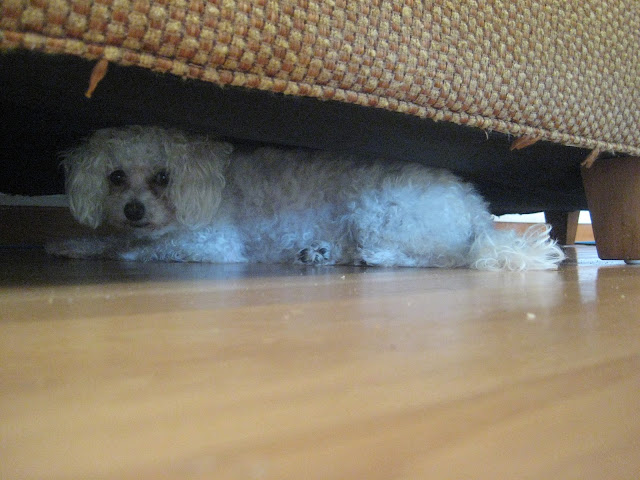 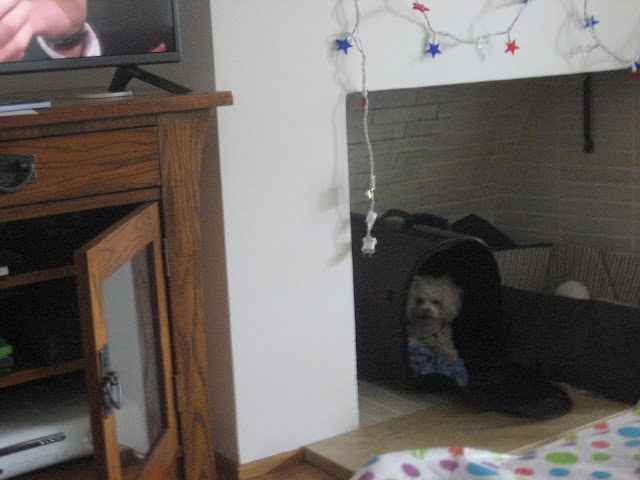 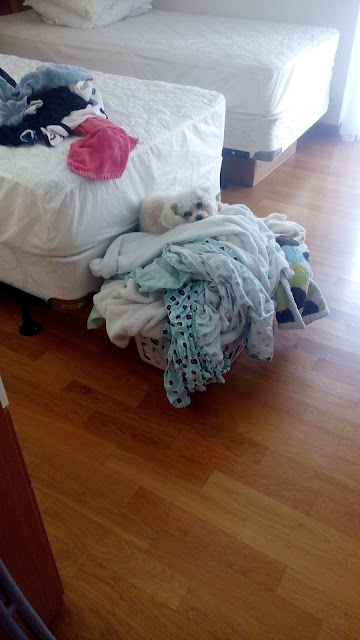 Our little family of four (I'm counting the dog, this is not a pregnancy announcement), trekked to Mount Parnitha this afternoon. Trekked is my term for "drove up the mountain in our car."

Mount Parnitha is the highest mountain in the Attica region. It's a short drive outside of Athens. The mountain houses a national park, a gondola to a casino, and a creepy, old, burned out sanitarium. There are gorgeous pine trees that smell like the forest section of a haunted house, and really pretty overlooks. I want to go back and hike sometime.


There was a massive forest fire on the mountain in 2007. It destroyed a lot, including an old sanitarium where they used to house TB patients from the city. The burned out building is still there--and said to be haunted. Across the road from it is an art installation carved into burned tree trunks that were found on the property after the fire. The artist said he was trying to evoke the horrible emotions of the place.

We didn't know any of this until about ten minutes ago when I googled it. We saw the burned out building, went, "Huh, ugly," then saw the creepy statues across the street.

This installation is called "The Park of the Souls." 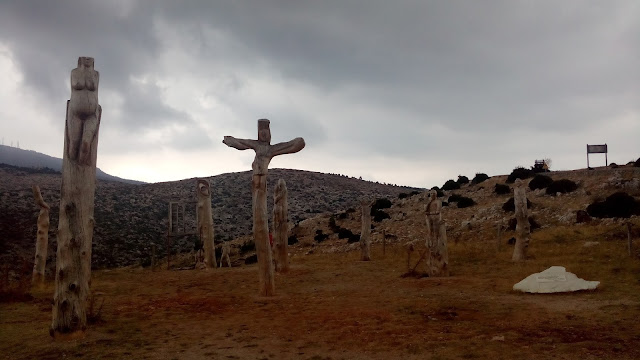 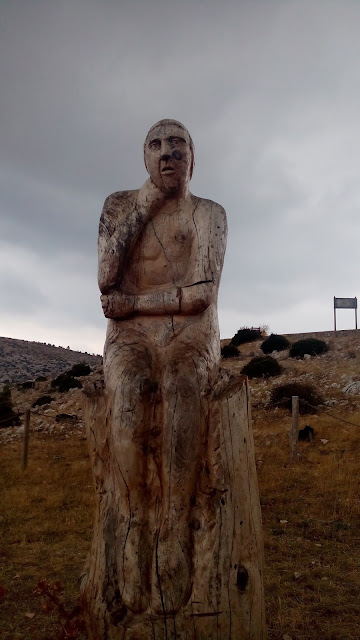 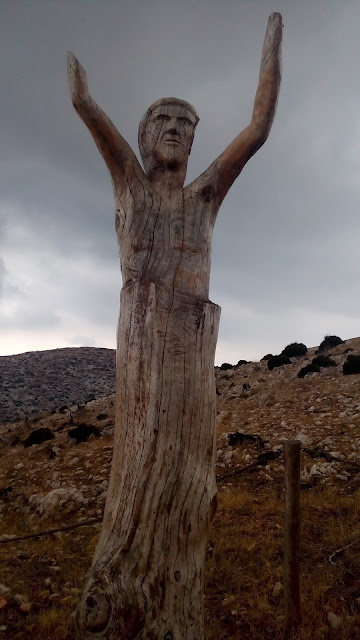 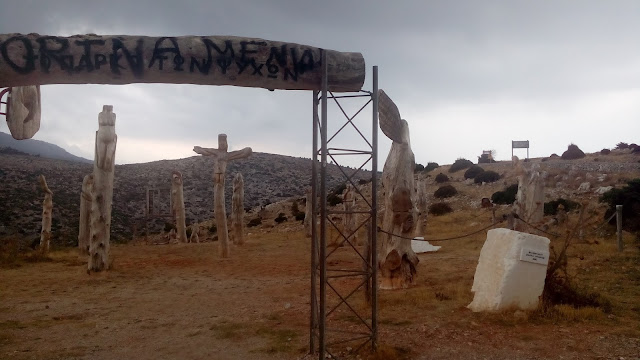 Those storm clouds in the background hit as we were leaving the mountain. We stopped at an overlook to see the valley, but the view wasn't great through the rain.

Here's what the storm did in the valley:

Mount Parnitha is pretty. I'm going back.
Posted by jj at 4:16 PM No comments:

I think I've mentioned before that driving in Athens in August is a delight. Most of the city goes on holiday for the whole month, and either take their cars to the islands, or leave their cars to rot in the boiling sun, while I zip merrily around the streets.

I normally don't take videos with my cell phone from behind the wheel while the engine's running, because it's not allowed in this country, and shouldn't be allowed anyway, since it's so stupid. But in this one isolated case, I was at a dead stop behind a red light, and immediately stowed my phone when we started to move. And I just really wanted to show you this traffic. I wish I could have captured a wider view. It was solid cars in front of me, behind me, and coming the other direction.

Ugh, go back on your holiday.

Email ThisBlogThis!Share to TwitterShare to FacebookShare to Pinterest
Labels: driving in Athens, driving in Greece, traffic in Athens

Phil's mom sent us another really nice care package. Though I refuse to accept that The Kid will grow into 12 month clothing, it was still a lovely, thoughtful gift.

I used to have a really nifty photo editor thing connected to my Google photos that helped me make my crappy Android photos look nice. Sorry if you thought my life was unedited. This is the internet, after all. Anyway, They did away with that program, and I really, really don't want to find a new one. I guess that means we're toning down the class and quality of this blog. Good.

For Labor Day, Phil, The Kid, and I went to Ancient Corinth. Ancient Corinth is right next door to Not-Ancient Corinth, but they aren't the same place. That distinction doesn't really matter. It's superfluous information and, if I were a better writer, I would chop it out of this piece. Corinth has a long, interesting history that is unfortunately too long and interesting for me to want to summarize much here. The basic gist is that it has been very important at times, and very unimportant at times. It has been thriving at times, and destroyed by earthquakes at times. Once, it was a big Roman city. Once, it was the capital of Greece. Go to Wikipedia for the details. They're fun.

You might know Corinth best as the city in the Bible that Paul had to yell at repeatedly. When the city was thriving under Roman rule, they liked to live it up big. They were prosperous, and wealthy. They also had a big temple to Aphrodite up on the hill that was basically a giant, religious brothel. Paul was not a fan. According to tradition, Paul preached on the steps of what was essentially city hall, and established a Christian church in the city. He wrote to them a few times to make sure they were toeing the line. See: The Bible.

There are two main archaeological sites in Corinth, with a smattering of old stuff in the outskirts of the new city. The Acrocorinth, or "Sex Mountain," as Phil and I affectionately call it, is a big fortification on a hill where the Corinthians kept second homes in case of pirate attacks. It's also where Aphrodite's temple was, hence the nickname. The fortification had free entry, but was a bit of a hike. For an especially rugged experience, strap a fussy baby to your chest.

I miss the edited photos. I do. The second main archaeological site is the ancient city of Corinth. There is a small, fantastic museum attached to the site. To see the city and the museum will cost you 8 euros, but they are worth it. There's a lot of old, pretty Roman stuff in the site and in the museum. Honestly, I think it's one of the nicest museums I've seen here, including the big archaeological one in Athens.


Corinth is not too far from Athens, and makes a nice day trip. We spent half a day at the sites, and you could easily spend the rest of the day at a pretty beach. So, go.
Posted by jj at 11:00 AM No comments: