Today's post is about culture shock, sandwiched between some lovely, positive pictures so your whole day isn't ruined.

In January, Phil and I visited Mexico for the first time. We were staying on a beach with a “red flag” warning for swimmers, which we wholeheartedly ignored. On our last day in the country, we were playing in the surf when a freak wave formed a foot away from our faces. It slammed us on our backs, sucked our sunglasses off, and scrubbed out every orifice of our bodies with deeply exfoliating sand. When we finally surfaced, I felt like an idiot. To have been so thoroughly debased in front of a bunch of tourists who still had their sunglasses was really embarrassing.

Culture shock is like a rogue Mexican wave; you’ve been warned to expect it, but you never see it coming. I don’t like to fail, privately or publicly. It’s embarrassing for me to talk about the culture shock I’ve been feeling here. Lots of people have told me how lucky I am to have this experience, and live in this beautiful place, and do whatever I want to do while Phil works. All of that is true, and I honestly appreciate what an exceptional opportunity this is. Even so, adjusting to a change this large is difficult.  It's acutely, inordinately, painfully difficult.

Culture shock hasn’t come in a neat, little package of stages for me. The honeymoon stage is completely mixed up with the frustration/adjustment/adaptation/homesickness stages; all of which are supposedly discrete from one another. One day, I feel like I’m starting to get the hang of things, and the next day I’m bawling on the phone to Phil.

As the tag along spouse of a foreign worker, I lost a large chunk of my identity in our move. I had to ditch most of what I love, without any sort of continuity on this side of the world. For the past four weeks, I’ve had no friends, no family, no employment, and no cultural context here to get me through the day. Until mid-afternoon, almost everyone I care about is inaccessible, either asleep or at work. Moving to a place where you don’t speak the native language is isolating. The stress of having to step outside without being capable of asking for the simplest help is unbelievable. Finding a job is a nightmare, and though I’ve heard there are plenty of foreign women support groups, it’s hard to find resources. I feel sad a lot. I feel lonely a lot. I want to come home at least twenty times a week.

An expat lifestyle isn't all about adventure and excitement. Only a very small part of our weekly routine involves jaunting off to find street snacks, and quaint beaches. This is not a multi-year vacation for us, it's a complete transition to an entirely foreign environment. Adjusting to a new country, even while knowing it will get better, and enjoying the new things it has to offer, is one of the hardest things I’ve ever had to do.

I decided to write this out because it's super cathartic, and because I want to provide real, honest information about living as the spouse of a foreign worker. I plan to write a bunch more about ways to deal with transition shock, generally, and as an expat. Right now, I'm hungry and tired, and you’re probably feeling the need to rush off and send me a care package with a bunch of fatty American food. I'll take two cases of Lofthouse cookies. Thank you. Here are two lovely, positive pictures of my adorable dog passed out in her house. May we all follow her example of regular naps. 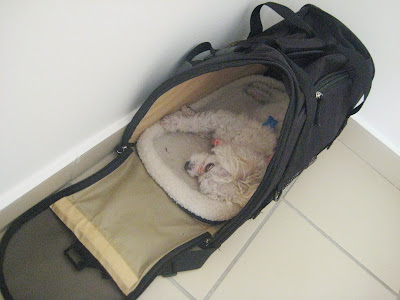